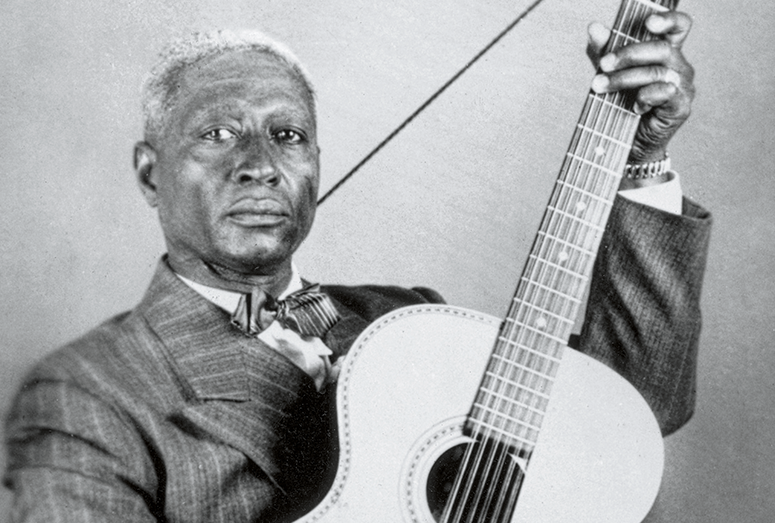 In the tradition of their Grammy award-winning box set on Woody Guthrie, Jeff Place ’79, archivist and producer for Smithsonian Folkways Recordings, and Robert Santelli, director of the Grammy Museum, offer a comprehensive tribute to a titan of American music, the guitarist and singer Lead Belly (Huddie Ludbetter, 1888-1949). The collection, called Lead Belly: The Smithsonian Folkways Collection, includes five music CDs, essays, a discography and rare photos and memorabilia, much of it published here for the first time.

Famous for his distinctive sound on the 12-string guitar, Lead Belly was a “walking encyclopedia of Southern music,” remarked ethnomusicologist and folklorist Henrietta Yurchenco in 1940. He sang the sacred and secular African-American music of his rural Louisiana youth, along with the songs of cowboys and sailors, prison songs and children’s music. Bob Dylan, Creedence Clearwater Revival, Led Zeppelin, Hot Tuna and Tom Waits are only some of the artists who have drawn from this wellspring.

Place’s essay explores the crucial figures and technological developments that affected Lead Belly’s career, beyond the artist’s troubled early life, including time in prison for murder. A key moment, his meeting folklorist John Lomax, is now legendary: Lomax traveled the South with his son Alan to document the music of African-American prisoners, and in Lead Belly, they met their holy grail. Famously, they presented him to audiences in New York City as a violent primitive. Quite a different relationship was forged with record producer Moses Asch (later the founder of Folkways). Asch saw his role as the conduit for artists to express themselves in their own way, an approach that yielded mutual respect and great studio sessions.

Among my favorites in the collection is the majestic “Fannin Street (Mr. Tom Hughes’ Town),” with its profound opening bass run and its tale about trouble in a tough district. “Alabama Bound” is a revelation, a pulsating, swingy ensemble effort with Lead Belly’s close friends Woody Guthrie and Cisco Houston.

Place provides the most learned and interesting song notes of anyone writing today. For example, the notes for “If It Wasn’t for Dicky,” recorded in 1937, unpack Lead Belly’s songwriting process and the flow and exchange of musical ideas across artists. Having heard an Irish singer do a song about a beloved cow (sung in Irish), he entirely rewrote the song to make it his own; eventually, his tune acquired new lyrics and became the Weavers’ smash hit “Kisses Sweeter Than Wine.”

Lead Belly will surely delight anyone with an interest in American music history, particularly fans of folk and blues music.

This emotionally wrenching novel opens with the central character, Jane, learning that she has breast cancer, then jumps back and forth in time, tracing a life of struggle and love.

Fred K. Drogula '92, Commanders and Command in the Roman Republic and Early Empire

(University of North Carolina Press). Drogula examines how Rome’s flexible traditions of military command helped it respond to new challenges and how leaders like Pompey and Caesar used that flexibility for political advantage.

(Bloomsbury Academic). These scholarly essays use the popular TV show Mad Men as a lens in exploring American identity, including issues involving power, race and gender, and style and substance in politics.

(Wiley). The longtime director of the Family Business Center at Loyola University in Chicago, Keyt uses the experience of such figures as Bill Wrigley Jr. and Christie Hefner to examine the complex challenges facing the children of iconic family business owners.

A "pessy-miss" (pessimist) named Madeline fears kindergarten until her grandmother captivates her — and us — with secret stories about a clockmaker's apprentice named Karlheinz Indergarten. Whimsy and wordplay sparkle on every page.

(Homebound Publications). A veteran who has lost an arm in Afghanistan wrestles with anger during a late-season stay on Monhegan Island. Gourmet cooking and a graduate-test-prep business catering to Yale students drive a story about class resentment and identity. In these 13 stories, Lehman populates his New England with true originals.

The elder Macauley (a former Kenyon Review editor) was working on this novel when he died in 1995. His son completed the book, about a Bavarian crystallographer assigned to build a military fortress inside an alpine glacier during World War I.

Ian Millhiser '00, Injustices: The Supreme Court's History of Comforting the Comfortable and Afflicting the Afflicted

(Nation Books). In this closely argued indictment of the high court, Millhiser — a fellow at the Center for American Progress — probes issues ranging from Jim Crow policies to the recent Citizens United case.

The eye finds them homely; the tongue, exquisite. Nowak’s fascinating book takes up the truffle from many angles: biological, historical, geographical, agricultural, economic, cultural — and, of course, culinary.

(Grand Central Life & Style). From George Washington in profile to a can of sardines, there’s a cookie design here for every occasion and fancy. See a profile of the baking artist on page 20.

(Morehouse Publishing). A retired Episcopal priest, Schmidt has written short biographies of 163 spiritual figures from throughout history and from diverse traditions.

(Stephen F. Austin State University Press). An emerita professor of English, Smith blends fable and realism in this haunting novel rooted in Native American life. At the center is the very real Sleeping Giant, a mountain in Connecticut that inspired legends and still casts a spell.

With simple lyricism and lovely photos, Tailer (a lawyer turned off-grid farmer) recounts the seasonal cycles of honeybees and beekeepers. For readers of all ages.

(Contra Mundum Press). White offers the first complete English translation of Fellini’s Fare un Film, in which the filmmaker wrote about his life and career. The book includes an introduction by White, the essay “A Spectator’s Autobiography” by Italo Calvino and an afterword by Fellini’s collaborator Liliana Betti.