During the golden age of illustration, Coles Phillips, Class of 1905, conjured a vision of American womanhood.

City papers are dying and you can't always trust the Internet, but Kenyon journalists embrace the challenge of reporting the news with accuracy, perspective and expertise.

Two students resurrect a theater group that focuses on the underrepresented talents of women.

A new engagement office will open doors in Knox County to Kenyon students.

The new Office of Spiritual and Religious Life will foster understanding and fellowship.

There's still work to be done, but I like to think it's getting better in terms of writing and roles. There's still a ridiculous discrepancy in pay. That can't continue." — Allison Janney '82 H'00, in the Irish Times, on opportunities for women in the entertainment industry.

Writer-in-Residence P.F. Kluge '64 defied the expectations of his classmate Emeritus Professor of English Perry Lentz '64 P'88 H'09 by being named Gambier Citizen of the Year. While making the announcement, Lentz admitted his surprise but went on to praise Kluge's "edgy eloquence" and dubbed him "the Salman Rushdie of Knox County, the H.L. Mencken of College Township." Professor of Religious Studies Royal Rhodes was named village poet laureate on the same day. In a poem, Rhodes observed, "Village life reflects the universe."

Despite its successes, science's reputation is shaky, writes Professor of Biology Chris Gillen. Ceremonial Masonic aprons, bearing characteristic symbols such as the all-seeing eye, belonged to “the first of Kenyon’s goodly race,” Bishop Philander Chase. They were donated to the Kenyon library in 1918 by Chase’s granddaughter, Susan E. Clark of La Grange, Illinois.

Chase’s involvement in freemasonry reflects the group’s importance in American civic culture. Many of the country’s early leaders, including presidents George Washington and James Monroe, were Masons.

Fifth-year head coach Erin O’Neill ’02 directed the Ladies softball team to its finest season ever, going 29-11. She now possesses a 96-93 career coaching record with the Ladies and is just nine wins shy of becoming the program’s most-winning coach. 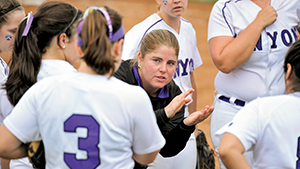 George Cooper Jr., a former member of the Detroit Lions and Atlanta Falcons, joined Kenyon's coaching staff this season, taking advantage of the National Football League Players Association’s (NFLPA) coaching internship program. “It gives me the opportunity for hands-on coaching, while learning from the other coaches,” said Cooper.

Head football coach Chris Monfiletto says he is thrilled to have Cooper on board this season as the outside linebackers coach: “Our players will have a great opportunity to learn from someone with experience at the highest level.”

Sadiq Jiwa, now a professional golfer, made his debut on the Mackenzie Tour (PGA of Canada) in September, he informs. “I’m slowly learning the ins and outs of life on the road as a tour professional.” In October, Sadiq moved to Phoenix to play pro events on the Outlaw Tour. In 2022, “I’ll be trying to qualify for the PGA Tour of Latin America, the Mackenzie Tour and some individual tournaments. I haven’t had the start I hoped for, but I’m learning a ton. This experience has made me really appreciate the Kenyon golf team’s indoor performance lab.”

Elizabeth W. Stanley, Philadelphia, is a program associate for student outreach at the Foundation for Individual Rights in Education, a nonpartisan nonprofit that defends First Amendment rights for students and faculty on college and university campuses.

“I’m living in a small, southeast Alaskan native village, where I retired 15 years ago as their postmaster. The fishing is the best in the world. Am making guitars out of the Sitka spruce from this island. Currently doing grandpa day care because of the ripple effects of the virus.”