OB-GYN and public health scholar Karen A. Scott ’98 is leading a new research project — the first of its kind — to study obstetric racism.

When her senior drama thesis performance was canceled due to COVID-19, Talia Light Rake '20 turned Zoom into art.

We need to be generous with grace and kindness this year, writes President Sean Decatur.

From Plexiglass in Peirce to psychology class in Rosse, fall semester looked a little ... different.

“With all of the challenges facing them, their gratitude — joy, even — in being able to sing together, no matter the current circumstances, has been an inspiration to me.” — Professor of Music Ben Locke, on directing the Chamber Singers.

“I am willing to sacrifice for the greater good of the public. I took an oath to that effect when I became a physician. But the public has to sacrifice some too if we want to get through this as safely as possible.” — Dr. Bradley A. Dreifuss ’01, an emergency medicine physician in Arizona, in a June 26 New York Times op-ed imploring the public to help health care workers fight COVID-19.

Poetry by Virginia Kane ‘22 encapsulates the surreal nature of living amid tragedy.

Add a pinch of Gambier to your holiday season with this classic autumnal Kenyon recipe.

Composer Andrea Daly '06 shares the inspiration and process behind the song "Beloved."

On Facebook recently, the mysterious account known only as Lorde Kenyon posed the challenge: “Ruin a Kenyon course title by changing one letter.” Some of our favorites from the 100+ responses:

Many of our inboxes were blowing up with campaign-related messages this election season, but at least one of them sparked a Kenyon connection instead of ending up in the trash bin. Alise Shuart Barrett ’92, texting on behalf of New Jersey Democrats, was randomly connected with Sophie Silberman ’19, working for Ohio Democrats. Silberman took to Twitter to share her “heartwarming textbank story” of intergenerational Gambier goodwill. 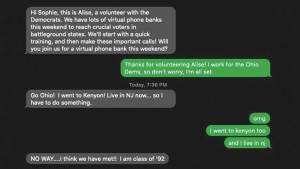 Reflecting how many of us have felt since March, the double doors of Peirce Dining Hall simply decided to give up, lie down and take a nap a few weeks into Kenyon’s fall semester. After all, enough else has gone wrong in 2020 — how much worse could a bit of ingress inconvenience make it? The faulty door was quickly set back on its hinges, but not before achieving minor Twitter fame.

Tofu: Is there anything these little soy-based rectangles can’t do? The versatile vegan staple has been a cornerstone of Peirce Hall’s modiﬁed operations this year, so several first-year students started an Instagram account, @kenyontofu, to rank each day’s offerings, which range from “cooked sponge” to “crispy on the outside, actually seasoned.” Come for the Tofu Bingo and stay for special guest appearances from tofu’s sidekick, “eatloaf.” The staged reading of the season three episode “Hartsfield’s Landing” reunited the cast and garnered online praise, including, “CJ at the podium again, how I’ve missed this,” and, “I have a queen and her name is CJ Cregg.”

Sadly, there was no reprise of “The Jackal.”

“Missing those seminars on the Hill? I have been listening to Melvyn Bragg’s In Our Time podcast. Few are about anything in our time; a very wellprepared Bragg and three academics dig into some topic — the Song of Roland, the poetry of Thomas Hardy, the mind of Alan Turing — and every week is something new. He keeps his guests on their toes, and I’m hooked. Only one episode a week, but a backlog of 300 — almost like being at the best seminar you remember, but Bragg never calls on you!”

Amy R. McKune and Kenneth E. Moncrieff ’85 moved into a new home in Kansas City, Missouri, in May 2021. “We have been lovingly renovating it to recapture its midcentury charm,” she updates. “We were wed four days later with a very small group of close friends in attendance. Several friends and family joined us via Zoom, including my father, John E. McKune ’52.”