Set aside the stereotype of the farmer as a man wearing overalls and a straw hat, perched atop a tractor by a cornfield. More than ever, farming attracts a varied lot — including a number of Kenyon alumni.

Delving into the history of design and material culture, a journalist-scholar discovers the humble dinner dish as an object of art.

The night before classes started in August, a 500-foot table covered with white linens was set up along Middle Path for a picnic of locally grown and sourced foods for students, faculty, staff and the Knox County community.

With BrailleNote and some creative help, a sight-impaired student makes the most of Kenyon.

The Kenyon Review is throwing a party—make that two parties—to commemorate its 75th anniversary.…

Professor Pamela Camerra-Rowe discusses the values and impact of the Tea Party.

A new biography offers a personal look at racism and privilege.

With a little help from the Lords football team, President Sean Decatur answered an Ice Bucket Challenge from Adam Weinberg, the president of Denison University. The challenge, a viral phenomenon launched to raise money for research into ALS, required a reply within 24 hours, a challenge to three others, and a shower of ice water. The Lords broke from their first practice at McBride Field to oblige the president with a blast of ice water—followed by full-throated cheers.

Kenyon's most popular major? English, right? Not in 2014. For the College’s limited edition book on the literary windows of the Great Hall in Peirce Hall, Professor of English Jennifer Clarvoe wrote about “Song of the Open Road,” Walt Whitman’s celebration of American character and freedom.

Lords football coach Chris Monfiletto took a .500 record into his third season: "Our only expectation for our team is that we approach each day armed with the confidence of having used adversity as an opportunity for improvement. If we can empower the leaders on the team to hold themselves accountable for recognizing these growth factors, then our small successes will snowball and enable our players to do some special things." 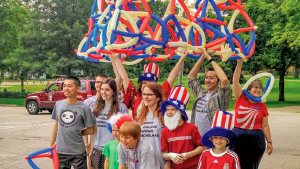 Hip to be Square

Math ruled at the Independence Day parade in Gambier.

Professor of Math Judy Holdener marshaled a dozen Summer Science Scholars, who created a balloon sculpture of a Sierpinski tetrahedron, a three-dimensional fractal. Holdener has for years hoped to enter a “float” in the parade, and this year was spurred on by math major Robin Belton ’16.

Lucas Kreuzer updates, “I’ve spent the last year and a half living in Vienna and rural Austria, teaching American culture and English in public high schools. It’s a pleasure to facilitate learning and cultural exchange with students every day, just as Kenyon taught me.”

Schuyler C. Bunn teaches middle school French in Louisville, Kentucky. “It’s been a crazy busy job, but I love it,” she writes. “Moving to a new city was hard, but my students make it worth it every day. I’ve also gotten to see a few other alums since we graduated! Kathryn M. Dawdy, Katherine E. Reber and Katherine H. Regan-Loomis came down to visit, and we had a blast. I also visited Andrew C. Savidge and Ali L. Fox back in Ohio. Even though life in Louisville is different from life on the Hill, I’m very happy.”

Matthew S. Mees, Braintree, Massachusetts, reports, “Dividing my time between casting concrete counter-tops, maintaining a small greenhouse and charting the quotidian of 18th century Boston and Newport. Current enthusiasms are levering heavy slabs; lunar planting; French/First Nation captive narratives. I find that I pay much closer attention to the weather and stars than I used to.”