With BrailleNote and some creative help, a sight-impaired student makes the most of Kenyon. 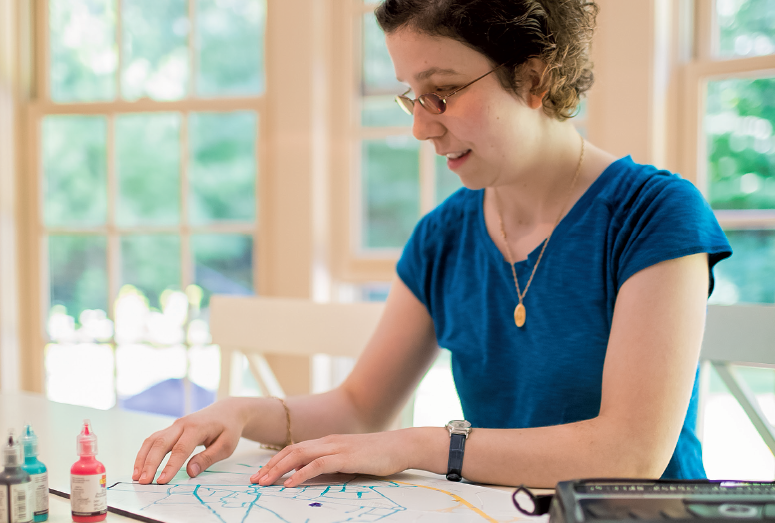 A Kenyon education isn’t about sliding by on minimum requirements, and Jameyanne Fuller ‘14 maxed out her experience on the Hill. She majored in English with a creative writing emphasis, undertaking an honors thesis in the form of a novel about four young people set in Italy during World War II. She also minored in Italian, and took two semesters of Community Choir.

If her life at Kenyon was well rounded, having her as a student made the faculty and staff expand their pedagogical horizons a bit, too. Fuller lives with a condition called aniridia glaucoma (she was born without irises), leaving her almost completely sightless. She navigates her physical environment with the help of Mopsy, her guide dog. When it comes to coursework, she uses BrailleNote, a computer that specializes in the tactile language.

But it took more than Mopsy and a computer to give Fuller a full Kenyon experience. It required inventive solutions to open up the material to her. English texts were straightforward; most are available digitally. Italian texts, however, had to first be converted to Microsoft Word so Fuller’s computer could then translate them to Braille. The real challenges came with science, math, and music—all of which depend, in crucial ways, on seeing.

Participation in science labs required some creative thinking. When a physics class experiment called for building a series of paper airplanes according to specific instructions—which Fuller couldn’t do—she instead managed the part of the exercise that tested how far each plane would fly, throwing each plane and recording the distance. “It worked because I learned the same things everyone else did,” she said. For calculus, which so often involves a visual component along with equations, Fuller described graphs in words to a sighted assistant assigned to her—or vice versa—so she could answer questions about the graphs. Professors used materials like puffy paint and thermo-sensitive paper to make charts and graphs tactile.

And then there was music, which posed a whole new set of challenges. To get Fuller the scores she needed—scores which she then memorized—the Student Accessibility Support Services office enlisted the help of Daniel Barich ‘05, who is legally blind and had been a music major at Kenyon. He would scan each score, make necessary corrections on screen, then send it through another program to convert it to Braille. His help, Fuller said, really made a difference. “He understood what he was doing from the point of view of music, not just Braille,” she said.

Fuller put in countless hours of her own, both in her studies and in finding solutions to the challenges she faced with her education. Erin Salva, director of student accessibility and support services, calls Fuller “a great teacher.” But Fuller says, “It was just a matter of ‘let’s do this.’” “Physically what it takes for her to do the work is many more steps than the rest of us have to,” said Katharine Weber, the Richard L. Thomas Visiting Professor of Creative Writing, who was Fuller’s honors advisor. “She is a tireless well of creative energy.”

The hard work brought big rewards. Fuller received high honors on her thesis, which is now being considered for representation by an agent in New York. She received both the Denham Sutcliffe Memorial Award for English and the Italian prize at Honors Day in April. She was accepted in the doctoral program in comparative literature at Dartmouth University—although she had to postpone her enrollment, because she traveled to Assisi, Italy, this fall with a Fulbright teaching assistantship.

Fuller knows she could have chosen a bigger school with perhaps more resources and experience in teaching sightless students. In fact, she looked at many. “I figured out what matter was not what resources they had, but what they were willing to do,” Fuller said. “Resources are one thing. Willingness is another.”