As the director of South by Southwest Interactive, Hugh Forrest '84 presides over one of the world's most buzzworthy celebrations of all things entrepreneurial, creative and tech.

Middle Path awaits the return of students in the fall.

The Lords took top honors for their third straight and thirty-fourth overall NCAA Division III Swimming and Diving Championship in March in Shenandoah, Texas. A total of 468 points put them 85 points ahead of runner-up Denison.

The Kenyon College Bookstore pitched a "Blind Date with a Bookseller" by wrapping staff-selected favorites in plain brown paper with a few words of description to capture each book’s essence and seduce a reader into a good read. With about 12,000 trade books in the store, there is plenty of love to go around.

Joe Hagin '79 has managed his life's work in both the public and private sectors. 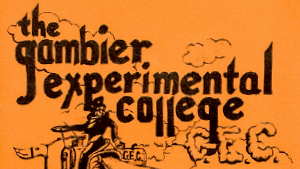 A Treasure from Kenyon's Archives

Founded in 1969 as a way of making Kenyon less elitist and more "relevant," the Gambier Experimental College drew on the talents of students, faculty and staff. Until it petered out in 1993, the school offered courses such as Consciousness Raising, Ethnic Militancy, Folk Guitar, Needlepoint, Tightrope Walking and Scottish Sword Dancing.

The teachers included Kenyon luminaries including Peter Woytuk ’80, who would become a noted sculptor (he did the crows on Ransom Hall), Harry Clor of the political science faculty and Joyce Klein and Peggy Turgeon of Friday Café fame.

Scott Thielke has accumulated twenty-two years of experience in two stints as coach of the Lords and Ladies tennis programs. His career includes a dozen North Coast Athletic Conference coach of the year awards (six with the men, six with the women), two Intercollegiate Tennis Association (ITA) Central Region coach of the year honors, and the distinction of being named the 2012 ITA national coach of the year. He counts more than 600 match victories with the two programs, and his teams consistently rank among the best in the country. 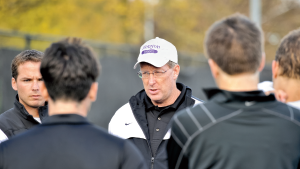 "The Pain," acrylic and paper on wood by Klara Auerbach '18.

The artist writes, "'The Pain' is the physical expression of my ongoing emotional progression in coping with chronic pain, a process not unlike the stages of grief. It is the process of having an unwanted spike intrude into your life and the stubborn, entirely human response of not wanting to accept its existence."

Kristen (Bruno) McClusky, Montclair, New Jersey, writes, “My family has survived pandemic life without getting sick — or killing each other. I’m still at Apple News. Kids are in eighth and eleventh grades, so starting to think about college. My husband is hard-selling his alma mater, Carleton, but I’m optimistic our daughter will realize Kenyon is the obvious choice.” Kristen was looking forward to seeing Brenda B. Burman in December. Margaret (Tuttle) Robinson, Dublin, Ohio, moved on from teaching kindergarten for eight years into a role as a gifted intervention specialist serving K-5 students. She happily reports having completed her master’s of education with a focus on twice-exceptional gifted learners.

Elizabeth P. (Anderson) Maloney, Rockville, Maryland, served as the alternate on Rise: A Feminist Book Project for Ages 0-18, part of the Feminist Task Force of the Social Responsibilities Table of the American Library Association. In August, Liz left her job after seven years as a children’s librarian for the D.C. Public Library to accept a position at the National Institutes of Health Patient Library. “The Patient Library is akin to a small public library, but in a hospital setting,” she explains. She continues to enjoy “being a purple-haired cat lady and wife to Seth Maloney.”

Neal M. Mayer, Millsboro, Delaware, reminisces, “Our lives can be changed by seemingly small and random events. I want to thank David Lloyd Evans for asking me to drive 185 miles to Western College for Women in the spring of 1962 with the promise of introducing me to a nice Jewish girl. When I noted on Facebook that Jane and I were celebrating our 58th wedding anniversary, Dave wrote, ‘We were all astonished at the instant combustibility between you both.’” Neal and Jane enjoyed having their four children and twelve grandchildren — including granddaughter Mia K. Tsuchida ’25 — visit for Thanksgiving and an early celebration of his 80th birthday.