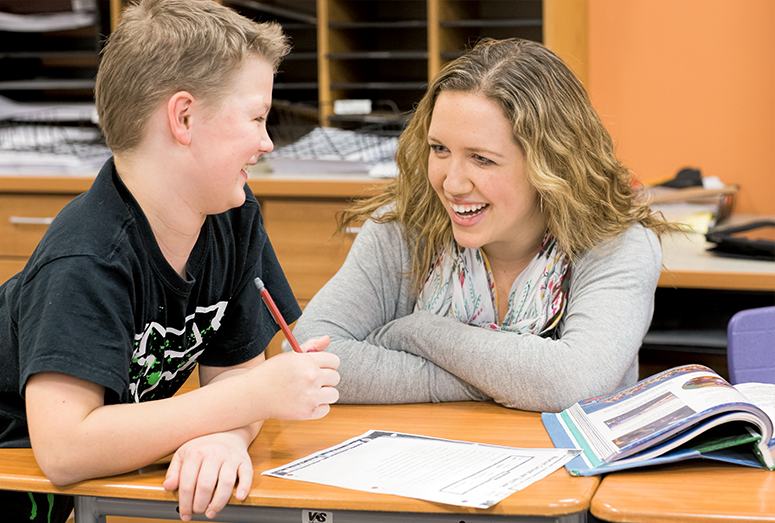 Education, for most people, is what you get out of it: a degree, a life-changing experience, new ways of thinking. But for Phoebe Roe ’16, education has been about giving back.

In the fall of her sophomore year, while writing for the Collegian, Roe discovered dire problems plaguing the East Knox Local School District, not far from campus. Repeated levy failures had thrown the district into a fiscal crisis in November 2013. Gym, art, and music classes were cut. Clubs and Advanced Placement courses disappeared. Athletics became pay-to-play.

“It shocked me,” said Roe, who had attended a well-funded public school in Pittsburgh. “I can say I’m a public school kid, but it’s such a broad term. There’s my public school, and there’s a large portion of the public schools in America that are just not well funded but so easily swept under the rug.”

Roe quickly devised a plan. She flooded student and faculty email inboxes, sharing her concerns and ideas. The response was overwhelming. “It was one of the best days of my life,” she said. “Everyone was so kind and so excited about getting involved.”

That was the beginning of the Partnership of East Knox Local School District and Kenyon College. As founder and president, Roe has organized more than two hundred volunteers, while working closely with faculty members and administrators at both Kenyon and East Knox.

Derick Busenburg ’05, interim principal at East Knox, was initially concerned that the district’s limited resources would mean that the burden of carrying the program would fall on Roe. “I know how isolated and demanding life on the Hill can be, and I wasn’t sure if she fully understood what she was getting into,” he recalled. “But Phoebe’s drive, commitment, and patience have been amazing. She has a huge heart and the will to back it up with meaningful solutions.”

When the short-staffed district was forced to resort to a schedule of four study halls a day, Roe helped volunteers channel their own interests into enriching classes. Today, students and campus organizations assist with gym classes and the track team; teach ballroom dance lessons, yoga, and band; tutor; participate in an after-school program; and serve as mentors for independent freshman projects. “East Knox is so incredibly flexible,” said Roe. “They’re really great about being open to help, and whatever students can offer, they take.”

The program also holds fundraisers for the district and organizes a college visit day for juniors, giving the high school students both the experience of a campus tour and the opportunity to discuss their college-search questions with an admissions counselor. “None of this would have been possible without Phoebe’s unique combination of vision, organization, and drive,” Busenburg said.

The school partnership is just one of many commitments that Roe juggles. She’s the co-president of Kenyon’s chapter of the Roosevelt Institute, a policy think-tank for students; founder/owner of the campus delivery service, Kenyon Carryout; a member of the equestrian team; an admissions tour guide — the list goes on. On Honors Day this year, she was one of two students to receive the Humanitarian Award.

And she’s a great student, majoring in psychology with minors in English and Arabic. Assistant Professor of Psychology Katherine Corker calls her “one of the most outside-the-box thinkers I have met at Kenyon.”

Her secret? No social media and an unlimited capacity for what she calls “robotting out.” She added: “But I do sleep.”

After Kenyon, Roe hopes to continue pursuing her passion for education through Teach for America. Eventually, she wants to work on education policy, with the dream of becoming the U.S. Secretary of Education. “I don’t ever want to lose sight of my goal to help people,” she said.

While the partnership between East Knox and Kenyon faces challenges — ranging from transportation for volunteers to future leadership — Roe is confident that the program will long continue to help students engage in meaningful work in the local community. Perhaps its greatest virtue, she feels, is the reciprocity of the learning experience. Working with a school like East Knox is “a two-way street,” said Roe. “The perspective you get from seeing that it exists ten minutes away from this place, it’s very eye-opening and very beneficial to us, too. I have a newfound humbleness in a lot of ways.”