Brian J. Berg '81 focuses his efforts on saving the historic Chautauqua Amphitheater, a landmark of his childhood. The 750-acre Chautauqua community on the banks of Lake Chautauqua in western New York helped write the coming-of-age story of Brian J. Berg ’81. It continues to fashion new memories for him today.

Sort of a seasonal camp for education, culture and contemplation, Chautauqua is where the young Berg, a Cleveland native, learned to type and took an SAT preparation course, which helped pave the way for his admission to Kenyon. He attended day camp there and later served as a camp counselor.

Chautauqua is where a concert by B.B. King introduced Berg to the blues, where crooners such as Ella Fitzgerald mesmerized him, where the starry-eyed youth dined with jazz piano great George Shearing after Berg’s mother befriended a member of Shearing’s party in a cooking class.

Berg can rattle off one memory after another. “It created in me an appreciation for art, architecture, culture and history that I have carried throughout my life.”

He harbors a lifelong devotion to the place and, in recent years, earned some battle scars to prove it. As chairman and co-founder of the Committee to Preserve the Historic Chautauqua Amphitheater, Berg heads a sometimes contentious years-long effort to save Chautauqua’s 122-year-old amphitheater from the wrecking ball. Berg rallied the community and a consortium of six national and local preservation organizations that opposed the demolition to make way for a $30 million modernized reproduction.

The 5,000-seat, open-air amphitheater has played host to speakers such as William Jennings Bryan, Booker T. Washington, Susan B. Anthony, Thurgood Marshall, Amelia Earhart and Franklin Delano Roosevelt, among other luminaries. It has been home for numerous artistic performances encompassing popular and classical music, dance, cinema, theater and opera.
“The ‘Amp’ is one of America’s great spaces,” Berg said. “The people speaking and performing on its stage have helped to shape and define American life, ideals and goals, as has Chautauqua itself.”

Berg compared the significance of the amphitheater to that of Old Kenyon, resurrected after it was ravaged by a fire in 1949, costing nine students their lives. “The amphitheater is to Chautauqua what Old Kenyon is to Kenyon College,” he said. “It is the heartbeat of Chautauqua just as Old Kenyon is the centerpiece of the College. Tearing down Old Kenyon was never an option because the College understood how important it was to the student experience and to distinguish Gambier from other campuses.”

When it became clear to Berg that the nonprofit Chautauqua Institution, which runs the Chautauqua community, was only interested in a tear-down of the amphitheater, he applied his public relations skills and experience for community development in Chicago to raise the issue of the facility’s future. He worked to place stories in print, broadcast and social media. “The media coverage helped us galvanize the public and generate support from concerned individuals,” said Berg. He enlisted help from architecture expert Paul Goldberger P’04 H’05 and preservation groups, including the National Trust for Historic Preservation, which designated the amphitheater a National Treasure.

Berg and his allies were not opposed to change, just this change. “We knew it needed updated,” he said. “But that is not what the Institution proposed.” Berg and preservation executive committee members enlisted CJS Architects of upstate New York to develop an alternative to the demolition plan.

The debate ignited by Berg and his allies highlighted the importance of historic preservation. His interest in the topic took root when he was a youngster during family trips to forts in the Niagara Region, and to other sites such as Ellis Island, Valley Forge and Gettysburg. His interest deepened during his years at Kenyon. “I was a history major and came to understand the importance of how places tell stories and pass histories to future generations.”

His efforts suffered a blow on Aug. 29 when the board of directors of the Chautauqua Institution voted to accept bids for the demolition and rebuilding of the amphitheater. “We’re prepared to continue to put forth the best steps to save the amphitheater,” Berg said after the vote.

Historic preservation not only enshrines the past, he stresses, it shapes the future. “Preservation is one way to meet the challenges of our time, such as the adaptive reuse of old warehouses and office buildings that are revitalizing our cities,” he said. “Preservation melds the past with the present. It does not sacrifice one for the other.” 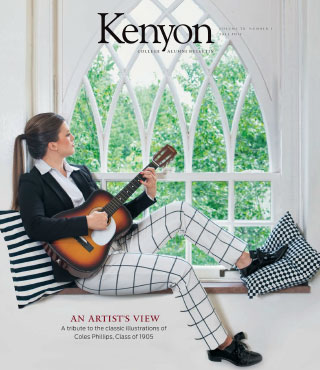