A photographer explains the genesis of a striking portrait and reflects on its resonance. 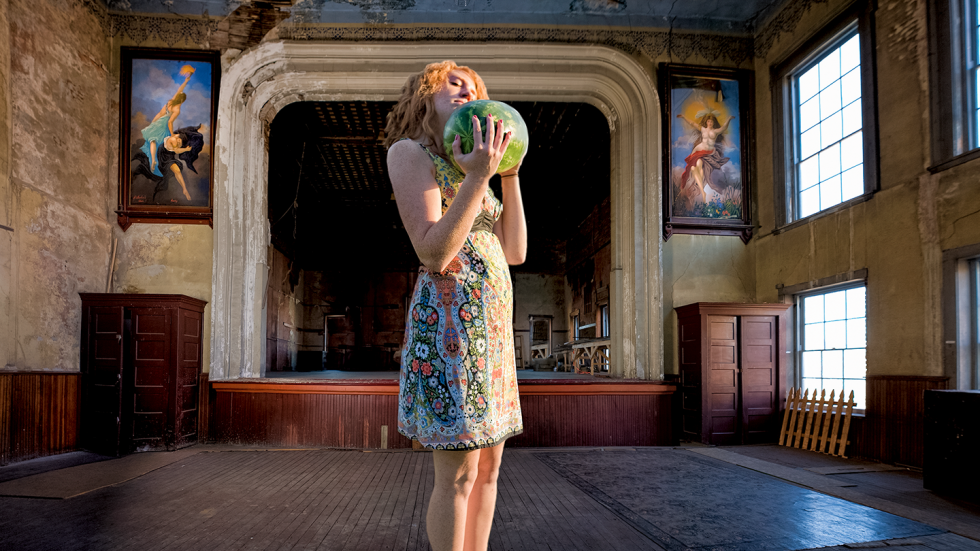 This photo is actually a composite of two different images. Working digitally, I was able to take the photograph of the woman (shot outdoors) and move her into the interior of the theater, which was photographed several months later. The young woman, Morgan, is the daughter of a friend of mine, and I had asked her if I could take some photos of her because she has a heightened sense of joy and a positive energy much like her mother. I hoped that her strong personality would influence the feeling of the photographs.

I did not have this final image in mind when I was driving to Fredericktown, Ohio, that August afternoon to work with Morgan. But on the way I stopped and bought the watermelon, thinking that it might become some part of the scene. And although we took many photos, my favorite moment from the shoot was when she lifted the melon, almost cradling it, closing her eyes to heighten sensations other than sight—the smell of the watermelon, the field of green plants and dirt in which we were standing barefoot, the warmth of the afternoon sunlight, the weight of the melon, the sense of summer, of memory, and time passing.

Several months later, I photographed the interior of the Woodward Opera House, a historic building being restored in Mount Vernon, Ohio. When I was working with the images later in my studio, I was drawn to the surprising and resonant narrative that developed by placing this twenty-year-old woman in this particular interior. The theater reminded me that “all the world’s a stage,” with the figure animating a transitional phase of life. On either side of the stage hang two enormous paintings, both featuring women magically floating in air, backgrounded by colorful clouds. Both reach their arms out from their celestial perches, perhaps suggesting that through the experience of art one surpasses gravity and the routine and opens the mind to new perceptions.

The title that I have chosen, “Viva la Vida,” is shared by and refers to a painting by Frida Kahlo, a twentieth-century Mexican artist whose profound and inspiring work is known worldwide. During her lifetime, Kahlo struggled with physical pain while producing artwork that addressed the beauty and the difficulty of life. Many art historians feel that her painting of watermelons—cut open to reveal their sweet red interior as if ready for serving to guests—was the last painting she made before she died. Inscribed on a melon wedge in the foreground are the words “Viva la vida”: “Live life” or “Long live life.” The central figure in my work embodies a positive and emotional message as well, and intentionally fosters a contrast and conversation with Kahlo’s work.

Photographs are sometimes like finding a page torn from a book, with the beginning and the ending remaining undocumented. The logic of the action is complex and shifting. In my work, people often seem guided by the sense of touch, emphasizing our human, corporeal nature. Reality is not automatic or clear-cut but in question. Throughout human history, light has been a symbol of knowledge in artistic production, and the streaming of light through the evocative windows of the opera house perhaps suggests that the main figure’s curiosity, imagination, and self-awareness are key components in the wisdom of the moment and the outcome of her story.