The following Founders' Day Address was delivered by Sir Lloyd Tyrell-Kenyon, Lord Kenyon and Sixth Baron of Gredington, in Rosse Hall on Oct. 26, 1999.

As soon as we came to Ohio, everybody I spoke to told me how honoured they felt that I had accepted to give the Founders' Day Address today; I have to say that I think that they got it wrong, since it is I who have been greatly honoured by this invitation to mark such an important milestone in the history of Kenyon College. I feel unworthy standing here at the moment, knowing how much more illustrious and worthy speakers have preceded me, highly qualified people, some with a far more intimate knowledge of the College, its history, its ethos, its customs, and most importantly its people, than I shall ever have. 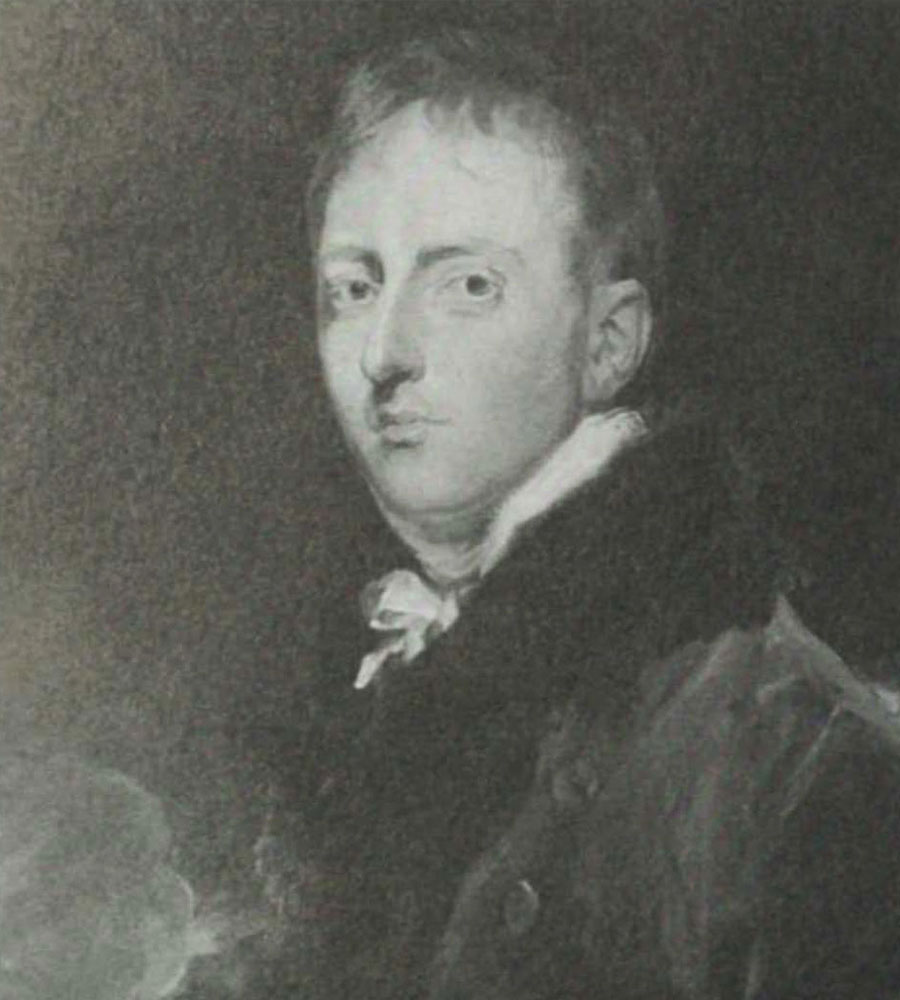 It was my great-great-great-grandfather, the second Lord Kenyon (pictured), who met Bishop Philander Chase when he came to England to seek funds for his vision of a new seminary in Ohio, although Bishop Chase's original introduction was to Lord Gambier, who, in turn, introduced him to my ancestor. The trials and tribulations that Bishop Chase endured in his quest, not least from the American Church, which actively opposed his venture and which had tried to influence the thinking of the senior churchmen in England to oppose the bishop's activity, are well documented, but mercifully there were many such as Lord Gambier and Lord Kenyon with sufficiently open minds to agree to meet Bishop Chase and, having heard his story, to contribute towards his goal.

Indeed from my ancestor's point of view there was a dividend to be gained, and I am not referring to the great honour that was subsequently bestowed by the naming of the College after him. Although he was well known both in society and in politics at that time and was a high churchman, he was not well known in ecclesiastical circles, so this occasion gave him the opportunity to, using a word that would surely have been alien to him, network with the hierarchy of the Church of England at that time.

So it was that Bishop Chase returned to Ohio from England with promises of funds to commence his project. You will note that I said "promises of funds" rather than just "funds": there was still a certain suspicion in the minds of the donors, who insisted on setting up a trust to oversee the money. Even if he would not have recognised the words, Bishop Chase was to be subjected to performance target assessment to ensure that the money was wisely spent. If my ancestor could see the result 175 years on, he would be left in absolutely no doubt that the targets had not only been achieved but exceeded countless times.

As I said earlier, Bishop Chase's first introduction in England was to Lord Gambier and not to Lord Kenyon. Lord Gambier was the original key; if he had not agreed to help further the bishop's cause, we might not be here today. Unfortunately Lord Gambier died a few years later, in 1833, without any children, so his title was extinguished; but only the title, for his memory lives on here. But it is unfortunate that there are no heirs to see how well the seed-corn of his contribution has been husbanded.

I thought it a remarkable coincidence when I looked in the second Lord Kenyon's diary for this day exactly 175 years ago to find not only that it was also a Tuesday but that he had written these words:

Heard again this morning from good Bishop Chase dated New York September 13th that he was to set out on 15th for Ohio. He had seen Bishop Moore of Virginia and B. of Connecticut who approved his proceedings highly. Bishop B. exhorted him not to let his Ohio seminary be a branch one.

I am delighted to say that I had the opportunity yesterday to see this very letter in the display of the College archives in the Olin Library.

So, clearly, by the time Bishop Chase had returned from England, the opposition from the other bishops had been removed and, as we can see from all around us today, there was no looking back.

Before I leave the second Lord Kenyon, I should add that he was also well known for his fervent desire that all children should have at least a rudimentary education, and with this in mind he founded a school for seventy-five boys and seventy-five girls some years earlier, in 1811, following a system of teaching developed by a Dr. Bell, who was practicing in Madras in India. Dr Bell's principle was very simple: he advocated what we would call a prefect system, whereby the more educated children taught the less well educated ones, thereby saving great expense on teachers. That school is still thriving, though now with only about one hundred children of elementary age.

So it is that, by a mere accident of birth, this link between Kenyon College and my family has been established and maintained for 175 years. In 1924, my grandfather was able to attend the centenary celebrations, and I have had a look through his bundle of papers concerning that visit to find that he was entertained just as magnificently as we have been since our arrival. He was amused by his interviews with the press, which was his first experience of reporters; even though he was deeply involved in public life and in politics, these were days before the press did any more than comment on the proceedings in Parliament, and the practice of lobbying a member of Parliament or a peer was very much in its infancy. Today, I find things are the opposite way round: the reporters are eager to find the slightest divergence between an individual's political views and those of his party as a whole, they take every opportunity to canvass, and they are readily prepared to supply their own views when the individual is reticent!

One of the newspaper reports from that time indicates the perennial problem of the differences in the English language as it is spoken on either side of the Atlantic: when he was discussing the number of cars on the roads in America, he had to ask what a "flivver" was, and this was duly explained to him. But this also illustrates the ephemeral nature of our language, for I gather the word is seldom used today. For those of you who do not know it, it refers to a popular make of car at that time.

My father came to Kenyon College three times in his lifetime. The first time he was invited to attend a conference on "The Anglo-Saxon Tradition," and, as he had very recently married, it became part of my parents' honeymoon. In those days, immediately after the war, travel was by no means easy, and he had to have the express permission of the Ministry of War Transport before he could make the journey.

I can still remember tales of this visit. Coming from Europe, where the war had ended but where shortages and rationing were to continue for the best part of another ten years, they came to America to find the shops full of goods that were unobtainable at home. They went on a spending spree. My father was a very meticulous man and had made a list of everything he had bought, and he presented this to the Customs officer on his return to the U.K. But for some reason or other the officer asked him to read the list out himself, which my father duly did, though he found he could get through the list more quickly if he only read out every other item, with the result that his import tax bill was not as high as it otherwise might have been!

He came again in 1974 for the one hundred fiftieth anniversary and for the third time in 1984 for the opening of the Olin Library. Again the cordiality of the welcomes was genuine and magnificent.

I myself came here thirty years ago, in 1969, when, having graduated from Cambridge, I took some months off to tour the U.S. with a friend from Cambridge before settling down to a job. At that time the U.K. economy was going through difficult times and there were currency exchange controls which limited us to sixty-five pounds each, about $l50, so we had to find some work to pay our way. Somehow we found a job selling ice cream in Detroit and earned enough money to buy a car which got us all round the States, including the Gulf states, Mexico, and California, before returning from New York to England, where we arrived with as much money as we had started with!

Although the College was closed for the summer holiday when we arrived, everybody we met made us very welcome and nothing was too much trouble.

Now, ladies and gentlemen, I shall leave the past and return to the present. To those of you who are starting your first year here I would say: enjoy yourselves. It may seem self-evident, for who could not enjoy them-selves in such wonderful surroundings. But your time here will constitute far more than mere education in whichever of the multitude of courses available that you have chosen; you will form friendships that will last the rest of your lives, and you will help to shape the world for the next generation.

Bishop Chase could never have imagined how his foundation would have progressed, and the technological advances that we have seen just in the last few decades would have been considered no more than the product of a very, very fertile imagination-maybe even heretical? That progress is all around us; it has a momentum of its own and is unstoppable. But we must all pause from time to time to consider the consequences: previous generations have made mistakes, often through ignorance, but sometimes through greed in the rush to exploit some novelty, which, in some cases have had an irreversible impact. Take the CFCs and their effect on the ozone layer. In addressing this unhappy legacy, you will of course learn to question each new step, but I urge you to make sure that that question, that debate, is applied most searchingly because, to use an English expression, there is no point in closing the stable door after the horse has bolted. At this, the dawn of the twenty-first century, I am reminded of the slogan on a T-shirt which my younger son has, with these words, apparently of nineteenth-century Cree Indian origin: Sir Lloyd Tyrell-Kenyon, Lord Kenyon and Sixth Baron of Gredington (pictured), traveled to Gambier from his home in England this fall to help mark the 175th anniversary of the founding of the College that bears his family's name. In addition to delivering the Founders' Day Address, Lord Kenyon toured the campus along with his wife, Lady Sally Kenyon, and, during a number of social events, met with members of the College community. Lord Kenyon is the great-great-great grandson of the second Lord Kenyon, whose support enabled Philander Chase to establish a seminary and college in 1824. In visiting Gambier, the current Lord Kenyon continued a tradition begun by his grandfather, who came to campus for the College's centennial celebration in 1924. His father attended the sesquicentennial in 1974 and returned ten years later for the dedication of Olin Library. He himself visited in 1969, following his graduation from Magdalen College, Cambridge. A prominent gardener with a special interest in viburnums, Lord Kenyon is also active in the Wrexham Borough Council and the Committee of the Regions of the Commission of the European Communities.