A student society relishes the challenges of parliamentary debate. 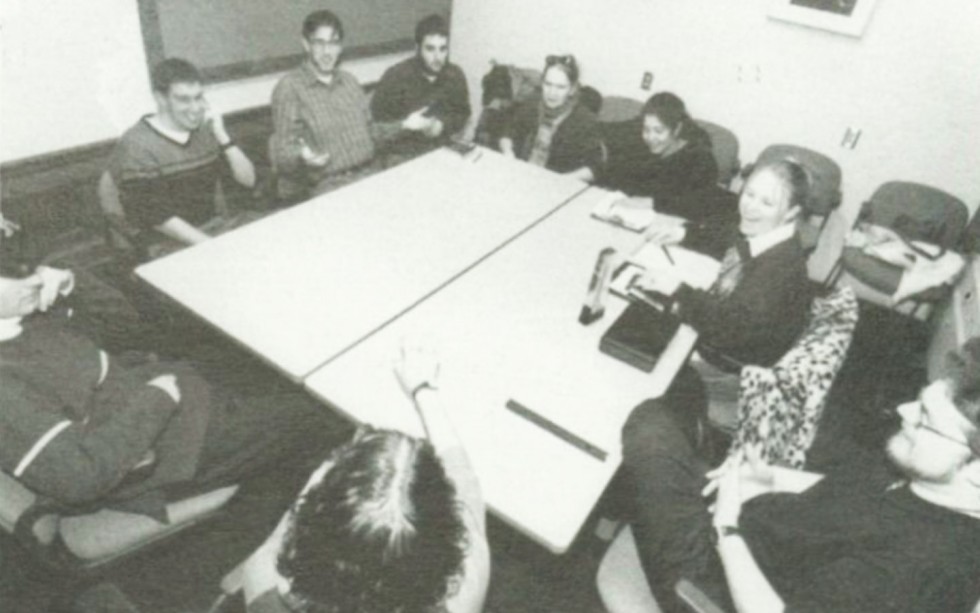 When members of the Kenyon Debating Society talk about the rigors of parliamentary debate competition, one wonders how anybody could see this activity as fun. There's ritualized heck-ling, the belittling of your ideas, opportunistic rule-bending, surprise definitions of terms at the heart of your argument, and the occasional personal attack — not to mention the basic challenge of having to be articulate, coherent, and persuasive on your feet, out loud, within a fixed time limit, and with virtually no time to prepare.

And then there are the Model United Nations contests, which pose their own forensic (and personal) challenges, including the need for extensive background research, political astuteness, negotiating skills, and sheer stamina.

A small group of students at the College relishes these challenges. Since its founding in 1997, the Debating Society has held its own in the debate world while bringing home an astonishing victory in its first Model U.N. conference. The team's success is all the more impressive given that many of the members are first-year students and that, unlike most of their opponents — teams that have coaches, quasi-academic status, and ample funding, including scholarships — they've done it all themselves.

"It's been a lot of work," says Laura Marx '00 of Johnstown, Pennsylvania, one of the society's founders. "We've learned by teaching one another and by comparing notes. When we started, we had no idea what we were doing, so we were very creative."

The very existence of the society exemplifies the cheerful tradition at Kenyon of students organizing new clubs when none exist to serve a particular interest. Chatting during their freshman year, Marx and Devin Bowles '00 of Carmel, Indiana, realized they and a number of other students had fond memories of high-school debating. They wondered, jokingly at first, whether a team at the College would fly. The next year, with a handful of other students, they decided to find out.

Named for the ritualized but sometimes raucous debating practices of the British parliament, parliamentary debate tests the competitors' logic, verbal adroitness, poise, and verve. Each team in a round consists of two debaters, with one team assigned the "government" side and the other taking the role of "opposition." The judges, generally students at the college hosting the competition, give them two topics: one is a serious, often political subject, such as "This House believes that Congress should return more power to the states"; the other tends to be off-beat, such as "This House would eat sushi" or "This House would rock the boat."

"For the first three or four minutes, you sit there and draw a blank," says Marx of the meager preparation period. "Then you and your partner start to brain-storm. You think of your best points, flesh out your arguments, and jot down notes for an introduction and conclusion."

In assessing the speeches, judges note the strength and number of the arguments and counterarguments made by each team. Composure and wit will strengthen your performance, says Marx, though she has seen some teams cross the line into condescending gibes and personal remarks. You are not supposed to come in with a "prepared case," but occasionally a team will arrive with a set of carefully rehearsed speeches, hoping they can bend one of the topics to fit their arguments.

There are strategic considerations as well. You might throw in a "dummy point," for example, in the hope that the other side will waste time shooting it down and thus fail to address your real points adequately. You can define a term in an unexpected way, rendering the opposition's planned rebuttal meaningless. Interruptions for "points of information" are allowed — and can be used to rattle your adversaries. In some rounds, the audience can interrupt as well, or heckle; spectators can move from one side of the room to the other to show their approval for a team's performance.

The Kenyon team has competed in three tournaments, two at the University of Chicago and one, in January, at Georgetown University. Facing schools such as Princeton, Stanford, and George Washington University, the team has had mixed success — Marx and Bowles went 3-2 in the first Chicago tournament, 1-4 at Georgetown — but has generally finished with a respectable showing in the middle of the pack.

"Kenyon may not yet have a reputation in debate," says Marx, "but we have been able to take on schools that are tiers above us."

At Model U.N. "conferences," teams of students are supposed to represent real nations convincingly, dealing with actual issues that come before U.N. committees. Success depends on in-depth research prior to the conference, but that's only the beginning. The conference itself involves long hours in committee, debating, drafting resolutions, and negotiating.

"You're judged on your speaking ability and also your ability to listen and reach com-promises, to actually accomplish something," says Passmore, a double major in political science and economics. "Acting ability is important to how well you represent your country's best interests."

Passmore was steeped in Model U.N. in high school, as was Blair. The two served as coaches for the Kenyon team, which represented both South Africa and Kazakhstan at the three-day Case Western Reserve event. "We tried to make it as much fun as possible," says Blair. "We wanted to lighten things up."

At the competition, for example, the students deliberately tried to use the word "zest" in every speech and resolution, a quirky gesture that created good will while making the team memorable. In the end, the team came away with a half dozen individual awards as well as a trophy for best delegation.

While it pleases Debating Society members to be faring so well against teams with established programs, they have seen how wearing the do-it-yourself approach can be. While attending competitions, the parliamentary debaters have had to sleep on lounge floors in noisy dormitories. And Marx notes that there are times she wishes the team had an experienced coach.

Nevertheless, the society is encouraged by the support it has received from the campus community, in part through fundraisers. In gratitude, Marx offered a five-session public-speaking workshop for members of the administration, faculty, and staff, and society members plan to offer a similar workshop for students, who often find themselves uncomfortable when giving oral presentations in class or as part of senior exercises.

"We've gotten a lot from Kenyon, and we want to give something back," says Marx. She promises not to heckle.