The third novel from Daniel Torday ’00 has a sonic pattern all its own. 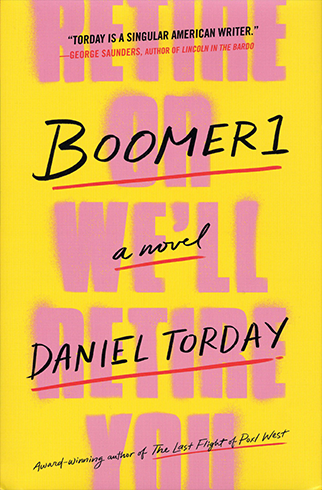 Punctuated by the percussive “Boom Boom” rallying cry of millennials and the timeless licks of fiddles and post-punk bands, “Boomer1,” the third novel from Daniel Torday ’00, has a sonic pattern all its own. In the early 2000s we meet Mark Brumfeld, his ex-girlfriend Cassie Black and his mother, Julia, and witness the story of Mark’s creation of a viral crusade against the baby boomers from their three perspectives. “Boomer1” reads with a witty ferocity deserving of its own YouTube channel, as the battle of the generations escalates to the hysterical and hauntingly plausible.

“I started writing ‘Boomer1’ in a place of confidence as a writer that I hadn’t had before. It was a pretty big shock to everyone involved that ‘Poxyl’ [‘The Last Flight of Poxyl West’] had a lot of really good attention,” Torday said, alluding to his second book. “I think it allowed me to write a book that was way more than just a product of my own imagination. I spent around eight years researching ‘Poxyl,’ with multiple trips to Europe and lots of book research. There was some homework for this one, but it was tertiary. I just felt like my fingers were flying across the keys, getting a whole imaginary world down in a way that I hadn’t had the experience of before.”

Mark’s rise to anonymous internet fame is pitted against Cassie’s navigation of a startup work place and Julia’s memories of her flirtation with success in her musical past. What they have in common, though, is all too familiar. “I really wanted to think about the ways sitting in front of computers and screens have led us down some pretty awful paths politically and terroristically, and the book was going to in some pure way be about that,” said Torday. “I was thinking about Mark making videos or thinking about Cassie editing video or thinking about Julia spending a lot of time home alone in front of the TV. I really wanted to be able to bear out each of their individual experiences of how time kind of goes away and how memory gets muddled by that experience.”

The experience of time spent immersed in technology permeates the book, and stands in comparison to the experience of time spent playing music. Amidst the myriad of identity markers that his characters parse, musical identity is a guiding force. A violin and viola player himself, Torday began learning guitar when he was a teenager. “I had this crazy experience at Kenyon of picking up a mandolin and realizing that between playing guitar and playing violin I actually knew how to play it. I used to go down to the bluegrass music shop on High Street in Columbus and pick with those guys on Sunday mornings, and I bought my first mandolin there and then I got pretty serious about mandolin in my 20s in New York. I played mandolin in a national Folgers TV commercial.”

While Mark, Cassie and Julia do not feature their talents in any commercials, their connection to their instruments, their music, and the music they inherit pilots the story. Torday couldn’t help but lean into this as he wrote. “I played in bands throughout my 20s and 30s and have always wanted to get some of that music stuff down on the page. There’s a very famous quote attributed to Frank Zappa which goes something like, ‘Writing about music is like dancing about architecture,’ so there was always that impossible-task aspect to it, but also if I was going to write about American revolution it was going to have to be tied to music. Especially since the 60s, the culture of music is always tied to the avant-garde.”

As Mark, Cassie and Julia step to and away from their music, the story of Mark’s revolution unfolds. If you didn’t get enough music from the pages of “Boomer1,” Torday also recorded a soundtrack to the novel, which is available on streaming platforms.

Reed Browning, “Death at the Reunion”
A phone call interrupts Connie Haydn’s “meandering revery” one June morning, and the retired philosophy professor finds himself once again drawn into a mystery that he will unravel with his friend and fellow amateur sleuth Shrug Speaker. Browning’s fourth Haydn and Speaker Mystery takes the duo from small-town Ohio to a veterans’ nursing home in remote Scotland, and into the world of espionage during World War II.

J.D. Emens ’83, “Boom! and Adversity”
A series of truly horrific health crises inspired the poems in this collection, in which Emens embraces joy and hope without denying the reality of suffering.

Eric D. Lehman ’94, “Great Pan Is Dead: My Encounters with Coincidence”
(Homebound Publications: Little Bound Books) The brief anecdotes in this slender book become an extended musing on whether our mundane experiences have meaning — whether the cosmos is “a living organism that only needed to be awakened.” Lehman also recently edited “Quotable New Englander: Four Centuries of Wit and Wisdom” (Globe Pequot Press).

R.S. McGowan ’75, “Acoustics of Speech Production”
McGowan, who has worked in the field of acoustics for more than 25 years, has written a comprehensive introduction to speech acoustics — the science of how the vocal tract creates and transmits sound.

Michael Monhart ’78, translator with Patricia Schiaffni-Vedani, “Enticement: Stories of Tibet,” by Pema Tseden
(SUNY Press) This is the first English-language translation of stories by Tseden, who is best known as Tibet’s leading filmmaker and whose highly regarded 2015 film “Tharlo” is based on a short story included here. Monhart, who has advanced degrees in both ethnomusicology and Tibetan studies, is a Jungian psychoanalyst in New York City.

Jason Morris ’99, “Levon Helm”
(Ugly Duckling Presse) Morris, who has previously written five chapbooks, here publishes a full-length collection of poems that dance from west to east, and from the “Dear old dreary daylit world” to “flashes of plasma matter” in the human brain.

Taylor Newendorp ’97, “The Perfectionism Workbook: Proven Strategies to End Procrastination, Accept Yourself, and Achieve Your Goals”
(Althea Press) Newendorp, who treats perfectionism and other disorders in his clinical counseling practice, describes the nature and types of dysfunctional perfectionism, explains treatment methods, and shows how those who struggle can come to “accept imperfection as a necessary and valuable part of life.”

Doug Ramspeck ’76, “Black Flowers”
(Louisiana State University Press) One poem in this collection (Ramspeck’s sixth) pictures the remnants of a father’s burned home, the flames “leaving only a skeletal brick / fireplace to scale the sky’s ladder.” Another recalls a heron gazing at the muddy waters of a river “in the manner that snow studies the land toward which it falls, / mindless and singular in focus, without / the encumbrances of mercy.” Ramspeck is a master of somber, piercing observation and evocative juxtapositions — involving nature, memory, personal history with words, as one poem puts it, “attempting sometimes to be sutures / and other times a scalpel.”

Jennifer Ash Rudick ’85, “City of Angels: Houses and Gardens of Los Angeles” with photographs by Firooz Zahedi.
(Vendome Press) As with her lushly illustrated books about Palm Beach and the Hamptons, Rudick has chosen an array of dazzling homes in Los Angeles and tells their stories — aesthetic profiles embracing history, place, architecture, ownership and, as she puts it in the introduction, “the ineffable alchemy of good design.”

“It’s strange, what the mind can digest and what it resists. I had just survived the most surreal summer imaginable — skipping back to bygone centuries, taming invisible monsters, falling in love with my grandfather’s time-arrested ex-girlfriend — but only now, in the unexceptional present, in suburban Florida, in the house I’d grown up in, was I finding it hard to believe my eyes.”

Ransom Riggs '01, “A Map of Days”
(Dutton Books) Ransom Riggs ’01 brings his beloved cast of “peculiar children” to our present-day real world in this fourth Miss Peregrine novel, “A Map of Days.” The signature pleasures of the series are very much alive: adventure, suspense, humor, surprising characters, and a winning weirdness, including another batch of wonderfully odd vintage photos to give a visual edge to the story.