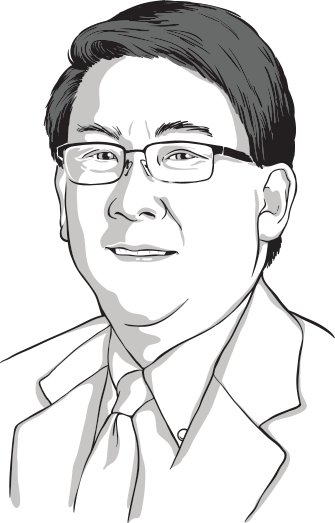 Recent college graduates will have more resources as mature alumni if they invest $5,000 each year in their 20s. That’s some of the advice Doug Wang ’78 gives to young people in his volunteer work in northeast Ohio.

“People generally don’t understand the magic of compounding interest,” said the retired senior vice president of Northern Trust. “If you put $5,000 a year into an S&P 500 index fund for 10 years from age 25 to 35 and never put money into it again, you’ll have significantly more in retirement than if you wait until you are 35 to start putting $5,000 a year in for 30 years, until you are 65.”

Wang was elected to the Kenyon College Board of Trustees by the alumni in 2016 and serves on the committees for admissions and financial aid and for student affairs. He recently made a significant contribution to Kenyon’s endowment for need-based scholarships.

After getting a mathematics degree from Kenyon, Wang worked for IBM and then earned a master’s degree from the Sloan School of Management at the Massachusetts Institute of Technology. He spent most of his career in portfolio management with American Asset Management in Cleveland and sold that firm to Northern Trust in 2011. Now he watches the market from his home in Shaker Heights, Ohio.

“With the decline of pension plans, now the onus is on the individual to manage their own money. ‘We give you the money and you invest it,’” he said. “But remember that the market makes people do the wrong thing at the wrong time. If the market goes down, it makes people want to do something. And if you really want to do something with your investments right now, you’re probably wrong.”

He is a retired board member and former chair of Saint Luke’s Foundation and still serves on the boards of Judson Services, the Rainey Institute, the Shaker Schools Foundation and the Village Capital Corporation. Wang watches economic trends through his involvement with Policy Matters Ohio, a think tank in Cleveland.

“The minimum wage is not a livable wage. Localities, through social services, are subsidizing the replacement of retail stores by Amazon. We are hollowing out the retail jobs, especially those for low-skilled workers,” he said. “Part of the reason that I give is that I’ve been very fortunate, and making charitable donations is a way to pay it back.”

In retirement, he has even found an elementary school classroom to sponsor in the Cleveland Metropolitan School District, helping the teacher buy LEGO robotics for student projects. “We are dependent on these kids becoming productive people when they grow up, and we won’t get that if we don’t support them now,” Wang said.