Seminar from Your Sofa

Juggling work, family life, breaking news updates and constant distractions from social media can sometimes make it hard to sit down, read a book and just think. If you ever wish you could head back to the Hill and take a seat around the seminar table, we’ve got the next best thing. With a focus on diverse topics, readings and authors, we’ve collected the syllabi from six intriguing Kenyon courses for you to read (and, in some cases, watch) along with from home. 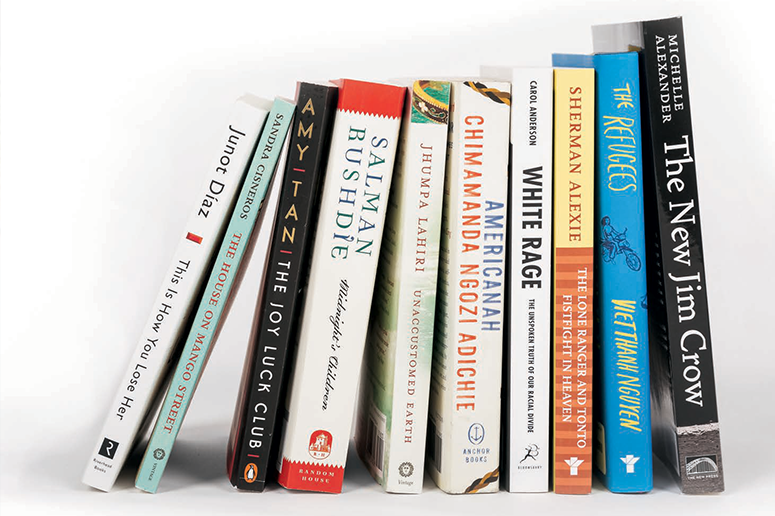 Ghassan Abou-Zeineddine, visiting assistant professor of English
From the course description: “We will  examine the ways certain Ethnic-American  writers practice this expansive literary form  that is not simply a sum of its parts, but rather  an intricate communication between its  parts to produce a luminescent mosaic. We  will consider the narrative risk of redundancy  in the form’s use of repeated motifs and  study how authors circumvent this risk. This examination will also seek to explore the  diverse range and complexities of the Ethnic-American experience, which is often shaped by immigration, religion, gender, sexuality, political  history and a sense of community belonging.”

Patrick Bottiger, assistant professor of history
From the course description: “This course will highlight the fact that American Indians are intimately intertwined with the histories of various European colonial empires, African peoples and the United States, but also that Indian peoples have distinct histories of their own that remain vibrant and whole to this day.”

Sam Pack, associate professor of anthropology
From the course description: “This course will examine the ways in which Asians have been constituted in popular culture and have constituted themselves through popular culture. The primary objective will be to challenge students to rethink the very notion of the popular and view popular culture not as something trivial but as a critical mode of production with racial, ethnic, political and economic ramifications.”

Glenn McNair, professor of history
From the course description: “This course will examine the impact of race on politics, political parties and public policy in the United States from the 1930s to the present. Topics will include federal housing policy, urban renewal, the construction of the highway system, the civil rights and Black Power movements, the rise of the Republican Party, busing, affirmative action, congressional redistricting and the War on Drugs.”

Marta Sierra, professor of Spanish
From the course description: “The course builds on four key concepts: development, democratization, cultural change and colonialism. Because transnational feminisms are represented by the development of women’s global movements, the course will consider examples of women’s global networks and the ways in which they destabilized concepts such as citizenship and rights.”

Arun Brahmbhatt, ASIANetwork-Luce Foundation postdoctoral teaching fellow in Hinduism
From the course description: “This course is an exploration of Hinduism and postcolonialism through fiction and film. We will examine how novels and cinema have provided an enduring medium over the past 70 years to grapple with notions of religious identity, history, myth, gender and sexuality.”