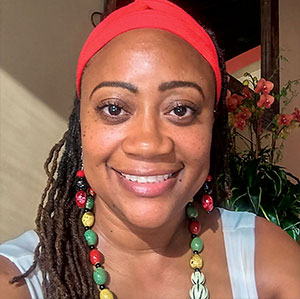 A Kenyon course in the biology of female sexuality triggered a career in reproductive public health for Karen Scott ’98.

Scott, an OB/GYN, is a sexually transmitted disease fellow in the department of family and community medicine at the University of California, San Francisco. In 2017, she hopes to receive a master’s degree in applied epidemiology from Emory University, which she attends online.

As a girl growing up in an impoverished section of Nashville, Scott dreamed big. “I was going to sequence the human genome,” she recalled. With visions of RNA, DNA and proteins dancing before her, she declared her major in molecular biology soon after arriving at Kenyon.

This early focus didn’t stop Scott from exploring other interests, however. She was a member of the Owl Creeks a cappella group and took full advantage of Kenyon’s liberal arts curriculum. She enrolled in a course on the biology of female sexuality that ultimately led her to rethink her intended career path. “We explored how societal and structural barriers negatively impact the health outcomes of marginalized communities,” she said. “I began to see medicine as the final frontier in terms of inequality and inequity, and I felt compelled to disrupt those systems.”

Scott’s interest in women’s health continued during medical school at Case Western Reserve University, but she nearly quit during her first year as an OB/GYN at a community-based hospital in Chicago. She felt hampered by her profession’s focus on the individual outside of social context, especially when so many of the issues she saw — teen pregnancy, lack of prenatal care, preterm births — originated in longstanding health disparities.

In 2009, Scott took action to help address these concerns, founding the Young Women’s Health Initiative to provide care and support for low-income adolescents navigating pregnancy and parenting. Through her outreach, Scott also became involved with the Illinois Caucus for Adolescent Health (ICAH), a network that advocates for the sexual and reproductive rights of youth.

“You can’t transform health care on your own,” she said. “This is a community process.”

As chair of ICAH’s board of directors, Scott led training to better assist health care practitioners in understanding the needs of their young patients. Her passion for the work eventually inspired another career shift into public health, leading her to work toward her degree in applied epidemiology.

“I’m examining the distribution and social determinants of STD disparity and equity — taking into account the relationships and institutionalized barriers that can either restrict or support a population’s pursuit of health, happiness and wellness,” Scott said.

The CDC-funded position, a collaboration with the California Department of Public Health and the California Prevention Training Center, combines research, evaluation, community development and provider training. In other words, it’s a perfect fit for Scott.

“This environment actually reminds me of Kenyon because I’m thinking critically about issues and creating space for people to share their opinions,” she said.