Same As It Ever Was

The final phase of the Middle Path restoration wraps up in the summer of 2016. 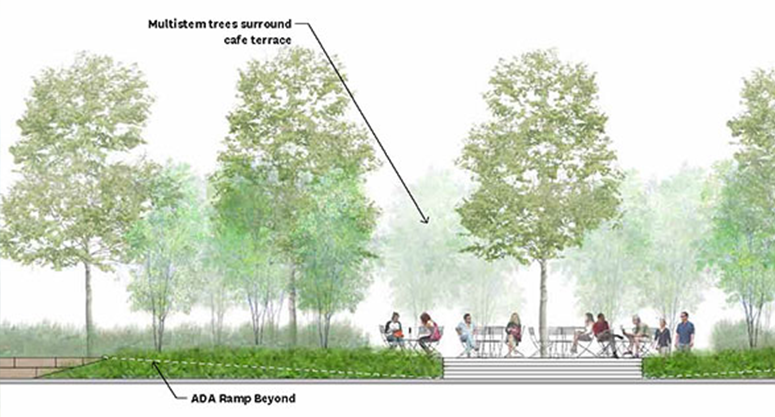 Kenyon is poised to embark on the third and final phase of the restoration of Middle Path, bringing to a close in 2016 the project that improves the appearance and utility of the path. The comforting feel underfoot and distinctive crunching sound of the path are ingrained in the memories of Kenyon alumni spanning many generations.

As detailed by Chief Business Officer Mark Kohlman before the Kenyon College Board of Trustees at its October meeting in Gambier, the project includes the installation of stabilized gravel from the College gates to Brooklyn Street to create new uses for the path in the center of Gambier, to enhance accessibility and to improve drainage.

“I think it is going to be really wonderful and is going to bring major positive change to downtown Gambier,” said College Historian Tom Stamp ’73, who sat on the Gambier Village Council and is a member of a College committee that provided input into the design planning. “It will attract more people to downtown and encourage them to stay for longer periods of time.”

The second phase of the project, on South Campus, wrapped up over the summer in 2015, bringing stabilized gravel, new benches and lights to the path. Path and curb work on the first phase, from Brooklyn Street north to Bexley Hall, concluded in 2014, and 50 trees, all oak varieties, were planted along that stretch in spring of 2015.

The College will use the same combination of a base of stabilized gravel with a loose gravel surface on the center section as was used on the north and south parts of campus. The plan includes realignment of secondary paths near the gates to match more closely with the crosswalks on Wiggin Street. A section of Scott Lane that crosses Middle Path in the downtown village will close to create a gathering place called a café terrace.

Most, if not all, of the 28 trees in the central section will come down because of poor health and anticipated construction damage, although at least a few of the newer trees may be transplanted. When the project is complete, 32 trees will thrive in the area. Popular flower gardens along the path in the village will be expanded.

The plan was reviewed by the Gambier Village Planning and Zoning Commission and Village Council in November. The final request for approval will be submitted to the planning and zoning commission in February or March. Construction is scheduled to begin after Reunion Weekend in 2016.

The third phase of the restoration project comes after months of work by a committee including alumni, faculty, staff, students and village residents, as well as Matt Girard, a landscape architect from Michael Van Valkenburgh Associates in Cambridge, Massachusetts, which handled the design.

“The primary reason for redoing this section is to make it more accessible,” Kohlman said. “The secondary reason is that the current landscape has become outdated and is deteriorating.”

The 40-by-38.5-foot café terrace is one of the most exciting areas of the restoration, said Timothy Broderick ’16 of Cincinnati, a student representative on the committee. “There’s no real gathering space in downtown Gambier now. This will be good for the Gambier community as well as the Kenyon community.”

In addition to the café terrace, a retaining wall of locally harvested sandstone on the Gaskin Street side of the path will help even the slope of the path. Benches set at angles from the path, rather than parallel to the path as now configured, will provide more areas for interaction.

“It will be an improvement to the campus, and it will make it more accessible for people,” said Steven Vaden, grounds manager. “This surface stays good and firm even during rain.”

The most recent news about the Middle Path restoration and other campus projects can be found at kenyon.edu/campus-progress.