Bulletin Editor Tom Stamp '73 reflects on the history of women at Kenyon and the idea that Gambier was once a "male preserve." 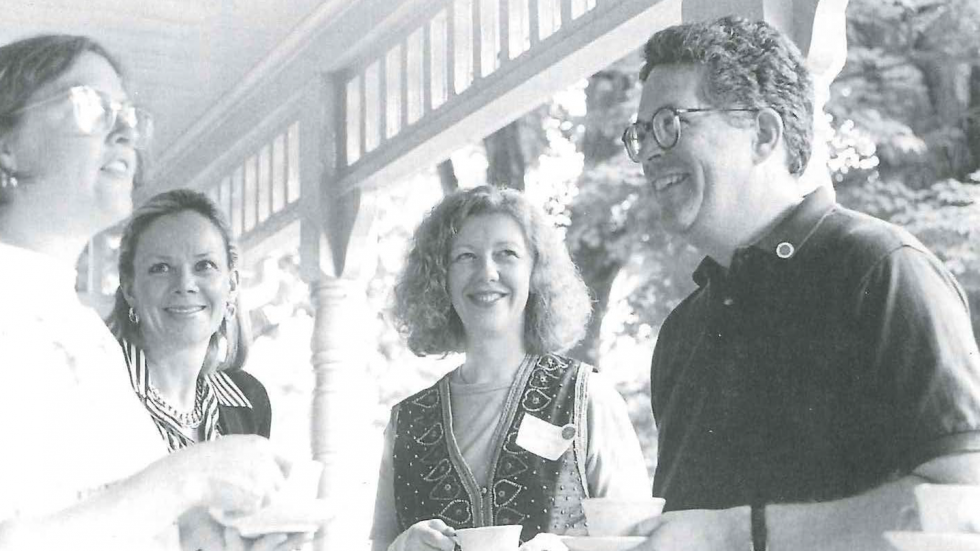 Some people think our culture makes too much of anniversaries, that they're primarily occasions for wallowing in empty nostalgia and, in institutional circles, for fundraising. I, for one, subscribe to this notion, especially when the anniversary in question reminds me that it has been a quarter-century since a momentous time in my life: the year I entered Kenyon with the groundbreaking Class of 1973.

But anniversaries can also be occasions to take stock of our memories, to cull the actual from the sentimental. For in­stance, as we remember the past twenty­-five years of women as students at the College, we also need to remember that the idea of Gambier as a "male preserve" in the preceding years was something of an illusion.

"Twenty-Five Years of Women at Kenyon" is, without doubt, an inexact title for this year's celebration of a quarter-century of women students in the College's classrooms and laboratories, on its councils and playing fields. The female of the species, far from being absent during Kenyon's first one hundred forty-five years, has been among the College's mainstays (as Associate Professor of English Adele S. Davidson '75 made clear in her Founders' Day address, reprinted in this issue of the Bulletin).

At the very beginning, there was Sophia Chase, the wife of Kenyon's founder. While most accounts of the formidable Bishop Chase lead us to believe that he was a difficult man, nary a single report portrays Mrs. Chase as anything other than a model of her various roles as College accountant, librarian, and supervisor of all things domestic, a difficult task in a frontier environment with nearly a hundred young men to feed and house. And, although their contact with Kenyon was somewhat less intimate, Hannah More and Lady Jane Rosse have long been revered members of that noble pantheon of philanthropists memorialized around the hilltop in the names of College buildings and village streets.

Over the years, women donors have been among the largest contributors to Kenyon's financial well-being. Some are memorialized in the names of book funds and scholarships, even a few buildings, although many others are not, having preferred to have future generations remember the names of their fathers, husbands; and sons.

Of course, women have contributed in countless other ways as well. For nearly fifty years, from 1887 to 1936, the Harcourt Place Seminary for Young Ladies and Girls brought a feminine presence to Gambier. It was there, in the buildings located where Gund, Lewis, and Norton residence halls now stand, that Edwina Dakin, mother of Tennessee Williams, and other young women received "gentleman callers" from the College. The school's teas provided opportunities for both sexes not only to practice their social skills but also, according to reports from the time, to engage in some lively debates.

Administering the College, from at least the beginning of this century, were women working as faculty secretaries, as librarians, as registrars. Philena H. Taylor, as part of a forty-year career at Kenyon, served as the College's chief financial officer on campus from 1917 to 1934. Eleanor M. Hicken, who arrived at Kenyon in 1922 and retired a quarter­-century later, labored for many years as the College's sole professional librarian. Among the most memorable of these female administrators were Lillian Chard and Mildred Kimball, affectionately known to generations of students as the "Bobbsey Twins," who came to Kenyon from Rockford College in 1938 to super­vise dining operations at the invitation of President Gordon Keith Chalmers. They stayed in their jobs for twenty years and retired in Gambier.

Women have also been associated with The Kenyon Review since the journal's beginnings. In fact, most credit Roberta Teale Swartz Chalmers, the accom­plished poet who was the wife of Presi­dent Chalmers, with bringing the idea of the literary magazine to fruition. And although some have questioned the openness of editor John Crowe Ransom to work by women, there is no denying that the women's work he published, by Flannery O'Connor and others, added to the journal's — and the College's — lustre.

While there were no women who held permanent positions on the faculty until 1969, women did appear in Kenyon's ivied academic halls from time to time, especially in the 1940s, when male faculty members were in short supply or students in more-than-abundant supply. On several occasions, Helen Harrington Black taught speech (while her husband, Professor John Black, was serving in the military), and Muriel Kahrl taught mathematics, as did Stanislawa Nikodym. And we would be naive to believe that other faculty wives were completely divorced from their husbands' academic duties. Probably more than a few examinations and papers were graded by female hands.

And, lest we forget, those faculty wives ( these were the days before we needed to use the word "spouses") were largely responsible for the active social life that made life bearable for Gambier's many transplanted urbanites, student and otherwise. Their remarkable hospitality was a major component of the College's reputation as a place where student con­tact with faculty members was part of the essential nature, where faculty members regularly entertained their students in their homes. (That social reputation spread far and wide among their col­leagues, too. At a farewell occasion when I was leaving Princeton University to come work at Kenyon, one of my older colleagues called me aside. "Oh, you're so lucky," he said. "You're moving to the dinner-party capital of the world!").