Pictures from an Institution

Professor of Drama Harlene Marley offers a portrait of the Kenyon of 1969-70. "The girls haven't changed things all that much — but then, things are changing."
—Reveille, 1970

The Reveille of 1970 consists almost entirely of pictures. Only the members of the Class of '70 are identified by name; discreet Greek letters identify the fraternities' group pictures. The only words are brief quotations from students and members of the administration and faculty; only quotations from people such as Albert Einstein are attributed. If you were at Kenyon at that time, all those pictures tell you a story about who you were, here, then. Here's a selection of pictures from my personal yearbook of twenty-five years ago:

A campus without Caples, the Bolton Theater and Dance Studio, the Ernst Center, the Olin Library, the Crozier Center. Most faculty offices were located in Ascension or in the Mathers. There was no weekly trash pickup, but there was a lively social scene at the village dump on Saturday mornings. No student telephones, let alone voice mail. Practically no computers, certainly not in faculty offices or the library or the dorms, and practically no copiers, but a lot of purple-inked ditto machines. No full-time physician. Dorothy's. Depending on the season, all the paths on the South End were dirt, mud or ice. Brinings News in Mount Vernon sold the New York Times on Sundays (well, most Sundays), but certainly not every day on the same day; the bookstore was closed on Sundays, and it didn't carry the Times anyway. WKCO's studio in the Hill Theater. The Kenyon Bench, with its eastern terminal in front of the Alumni House and its western terminal at the corner of Gambier and Gay streets in Mount Vernon. The KCDC production of "Marat/Sade."

Rosse Hall retained its level gym-sealed floor from a previous incarnation — with a speed bump at the east end. Because the College's course selection process was not yet fully computerized, during registration faculty members sat at tables in Rosse with boxes of do-not-fold-staple-or-mutilate cards in front of them; students registered for courses by going from table to table and picking up cards. Final examinations were given en masse in Rosse (it was furnished with a tangle of folding desk chairs), several classes taking exams at the same time in the same place, with faculty monitors pacing the perimeter. I was late for an exam because I overslept.

Everybody smoked, all the time, everywhere.

Portraits: John Kushan. Ken Taylor. Larry Ropp. You can add other portraits to these.

Four women members of the faculty and senior administration: Doris Crozier, dean of the Coordinate College for Women; Robert Dunn in political science; Barbara Woshinsky in French; me. Dean Crozier probably had a sense of being a pioneer, of building something where nothing quite like it had been before. I can't speak for Roberta or Barbara, but I admit that I din't feel much like the new school marm bringing couth to an uncouth frontier. I simply took a better job in a more congenial atmosphere at a higher salary than the one I had before. Hovering in the background of this picture are all the women who worked at Kenyon throughout its history: some of them were the wives of faculty members who offered home-cooked meals and friendship to generations of students; others managed the offices, typed the letters, prepared the payrolls, sent out the bills, processed the library books, cleaned the buildings, acted in the plays, made the costumes and found or lent the props, played in musical ensembles, served the meals. From time to time before 1969, a few even taught courses.

All those pictures in Reveille 1970 show mostly men in the classrooms, the dining halls, on the lawns and paths. There were one hundred plus women students and eight hundred or so men. Today, if you take a snapshot of Middle Path or a classroom or a dining hall, more than half of the people in that picture will be women.

If these were 1970 talking pictures, the conversations would be about the Vietnam War, drugs and hair.

Most of those eight hundred male students were subject to the draft. And then, in the spring, the shots fired at Kent State and Jackson State universities echoed across Kenyon's campus, too.

When Swedish Prime Minister Olof Palme '48 spoke at a Reunion Weekend convocation, Secret Service agents dotted Middle Path during the academic procession and Palme spoke over the shouts of members of a longshoremen's union who had driven from Toledo to protest his position on the war.

I retain a vivid mental pictures of the dress-up party in a fraternity lounge at which many faculty members and their spouses were in attendance. The bar was decorated with potted marijuana plants.

Two of my favorite actual pictures form that year are not in the Reveille. The first shows the women of the Coordinate College on the steps of Rosse Hall; almost all of them have identical long straight hair. The other shows the back of a football player suited up for a game; masses of black curly hair escape from under the edges of his helmet.

Background music for these pictures was provided by the Stones, Jefferson Airplane, Bob Dylan, et al.

Harlene Marley, professor of drama, was the first woman hired by the College in a tenure-track position and the first to reach the rank of full professor. 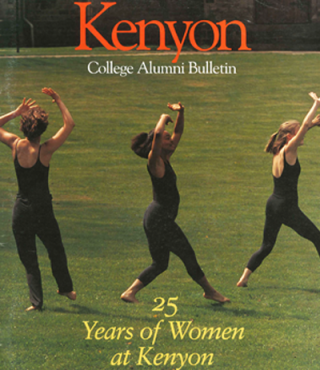