Blast from the Past

The road toward gender equality at Kenyon has been, dare we say, uphill. From our 2019 vantage point, we mined the archives and unearthed these eyebrow-raising moments from the history of coeducation at Kenyon. In the fall of 1962, students returned to a campus that no longer provided maid service in student rooms. Forced now to make their own beds — in the words of President F. Edward Lund, “just like the boys at Harvard and Yale” — the men aired their grievances in print. The March 2, 1962, Collegian reports that, “among both maids and students the general consensus is that the typical Kenyon man is inherently sloppy.” Further, the article’s author, noted, “everyday trash, dust, and grime will inevitably collect, producing gloom on the college scene.”

To recruit prospective female students, the College ran an advertisement in Time magazine. “Like her mother before her, she’s looking forward to the challenge and stimulation of a fine women’s education,” the ad explained of its ideal applicant. “Our plan establishes a separate environment for women, with full participation in our academic life.”

A story in the Cleveland Plain Dealer’s Sunday magazine featured interviews with several men about the women who would soon join them at Kenyon, “needed or not.” One student told the writer, noted Ohio historian Grace Goulder, “We like women — when we want them. But not cluttering up The Hill all the time!” Another student shared the view that women would be overwhelming in large doses. “I’m not against women. I date a girl. … We see each other about once a month. If she went to classes here on The Hill … I’d have to see her every day!” Provost Bruce Haywood noted that “changed social and culture conditions demand sustained and balanced dialogue between the sexes” in defending the as yet unnamed coordinate institution, which some students suggested calling Chase College — ”Not for Old Philander, but because the girls will be chasing us.”

The Reveille yearbook included coverage of the College’s rocky transition to coeducation. “Among most of the upperclassmen, there seems to be a certain amount of uneasiness at best, and resentment at worst, about the presence of women on this campus. … But the women have already had a noticeably positive effect on the Freshmen and Sophomore classes — they already have more fluid social lives,” one unattributed student quote read. A less charitable quote, however, opined that coeducation has “more or less destroyed lots of the intellectual atmosphere … and the freedom of men by themselves.”

The Reveille yearbook ran a photo of Kenyon’s first female graduate, Belinda Bremner ’71, along with a caption: “The first delicate female hands take hold of a Kenyon diploma. If Philander Chase had any pull with the powers that be to make a sign and show displeasure, he didn’t use it. The sun shone bright and birds sang.” 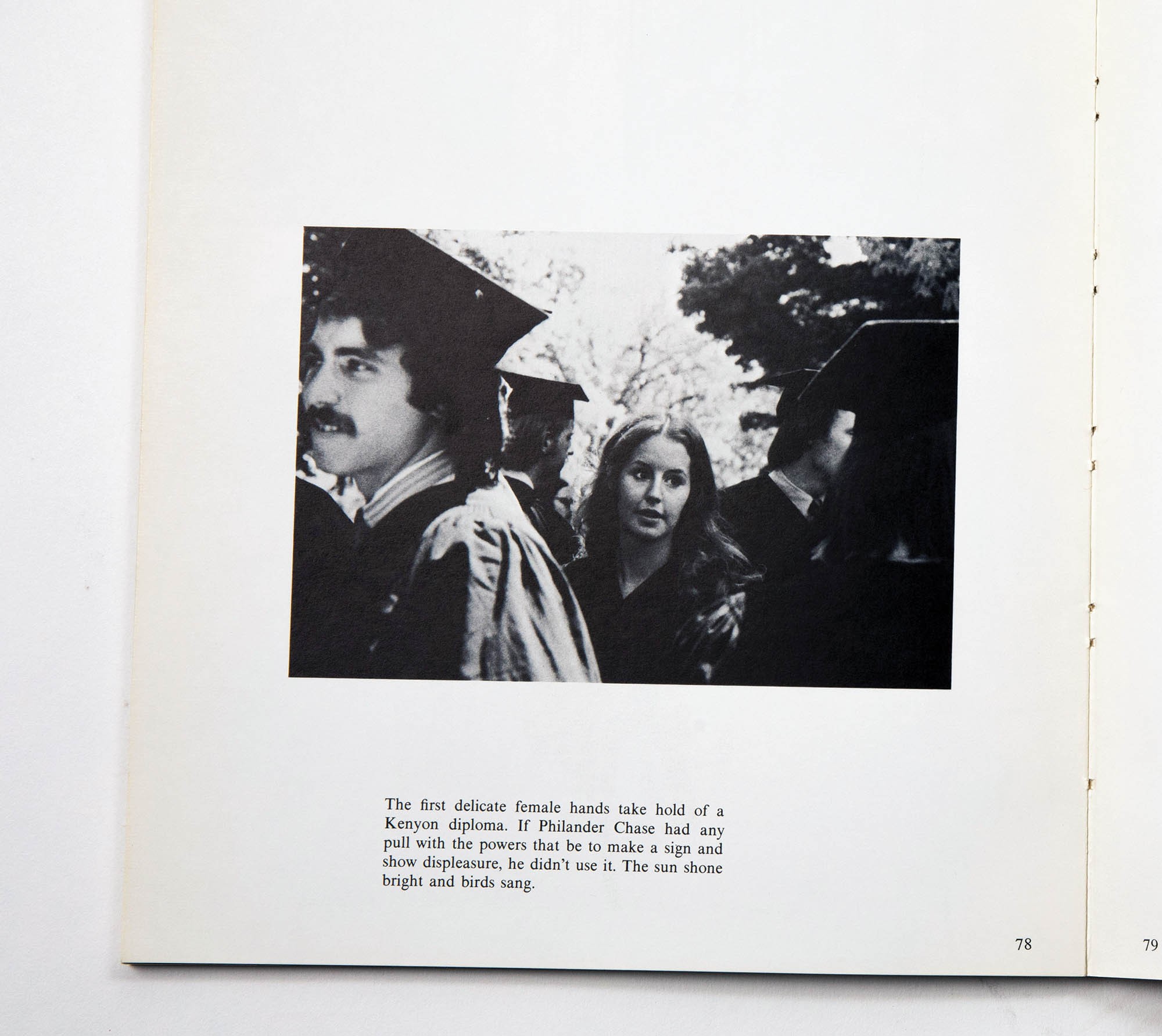 A song titled "Mrs. Bishop Chase" was performed at the Founders' Day Service. A sample of the lyrics: “The first of Kenyon’s goodly race/ Was that great woman, MRS. CHASE./While he climbed hills, and said that prayer/She was at home and working there." In response, a group of female students co-signed a letter to the Collegian on Nov. 2. It said: “To be a woman at a men’s college is, at best, a difficult experience. We have worked hard to establish an image of women as responsible, intelligent and independent human beings. … We do not see the inherent humor in this song and we do not understand why those who found it funny would have inserted it amidst the dignity of the serious Rite of Matriculation.” Adding insult to injury, the newspaper added an extra “signee” to the letter, with the unfortunate name of “P. Envy.” The editors issued a lengthy semi-apology in the next issue of the paper, noting that “originally a staff joke, the P. Envy was never intended to get past any of the printing stages." The late, great Harlene Marley H’05 often told a story about her early days at Kenyon as a drama professor. “I remember that during the events surrounding Philip Jordan’s inauguration as president of the College, I was incredibly busy with a number of things when a faculty wife called me up to ask if I could contribute a couple dozen cookies for something,” Marley recalled in a Spring 1995 Alumni Bulletin article. “I replied, ‘Are you asking any of the male faculty members to bake cookies, too?’ I was never asked again.”

The Sept. 24 Collegian ran a letter from then-senior Clara A. Porter, “Womyn Offer Alternatives,” in which she happily noted a burgeoning young social scene led primarily by female students. Two snarky first-year students, however, were less than amused and said so in their own letter to the editor, which ran in the Collegian’s Oct. 1 edition, under the headline “‘Womyn’ Must Have Been a Typo.” Mario P. Oliverio II ’90 and Daniel C. McGuire ’90 urged “Ms. Porter to call Mr. Webster or drop Random House a line alerting them to the infinite hours of overtime needed to (accommodate) her changes to the English language. … We wish to express our hope that this was an error and not the flagrant act of some renegade female wishing to neuter the English language.”

In addition to food, Peirce Dining Hall also served Kenyon women a generous portion of discomfort, according to an article in the Spring/Summer 2009 Alumni Bulletin. “From the advent of coeducation, women resented having to parade down the middle of the Great Hall while guys at the fraternity and team tables conspicuously assessed them. The passageway — indeed, the whole experience — became known as ‘the catwalk.’ … ‘The men use their seating to publicly (both visually and verbally) rate the women as they walk by, commenting on the women’s clothing, body shapes, and eating patterns,’ wrote members of the 1998 senior seminar in women’s and gender studies. ‘This has made many women so uncomfortable that they no longer eat in Peirce.’” This persisted until 2008, when the College completed major renovations to Peirce.

The March 23, 2006, edition of The New York Times featured an op-ed by Jennifer Delahunty, then-dean of admissions and financial aid at Kenyon. Titled “To All the Girls I’ve Rejected,” the piece tackled the always burning question of gender balance in college admissions, and noted, controversially, that men were at risk of becoming an endangered species at U.S. colleges and universities. Needless to say, it went viral before "viral" was even a thing. “Though Kenyon was a men’s college until 1969, more than 55 percent of our applicants are female, a proportion that is steadily increasing,” Delahunty wrote. “The reality is that because young men are rarer, they’re more valued applicants. … We have told today’s young women that the world is their oyster; the problem is, so many of them believed us that the standards for admission to today’s most selective colleges are stiffer for women than men. How’s that for an unintended consequence of the women’s liberation movement?” Investigative reporting in the Collegian exposed a problem that was shocking only to about half of the student body: a dearth of menstrual products in campus restrooms. The Nov. 17 Collegian reported, "For the past four years, maintenance has not been refilling the dispensers in the bathrooms of academic and administrative buildings.” Collegian staffers surveyed the availability of menstrual products in 18 academic and administrative buildings and found that out of 21 dispensers, only two had accessible tampons. Many bathrooms did not have dispensers at all, while the others were either empty or broken. Worse, though, was that the two full and functional dispensers were stocked with tampons that were beyond their five-year expiration dates. A staff editorial declared, "These coin-operated dispensers are essential for the moments every individual who menstruates has experienced: realizing that it’s that time of the month, and you have no supplies on hand." 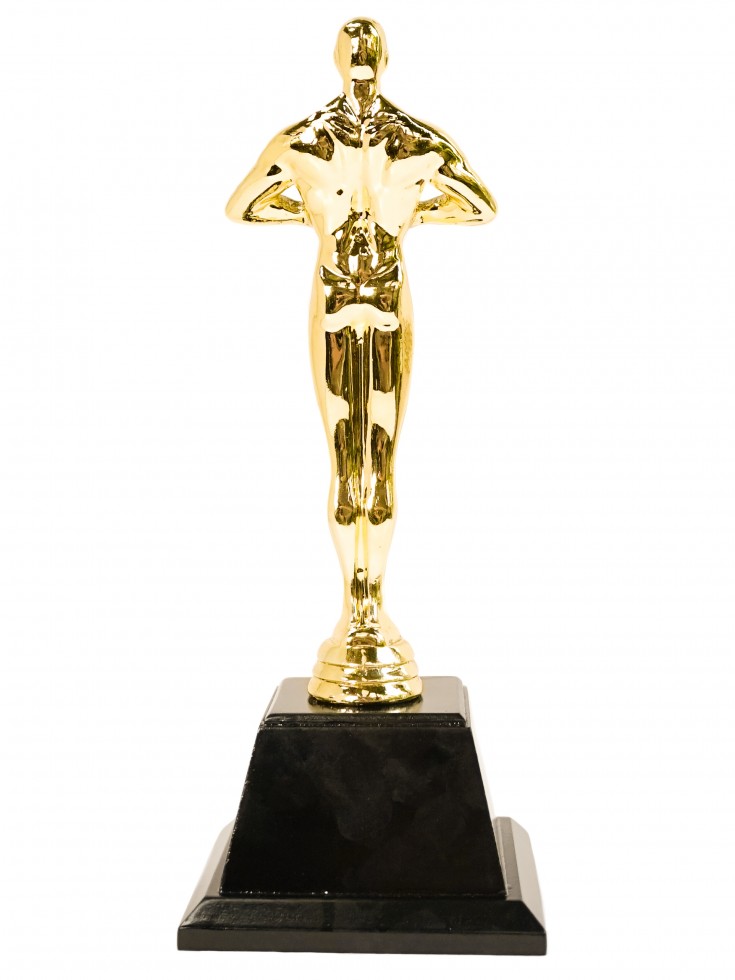 Three years after the Collegian reported on the lack of menstrual products on campus, students turned their attention to menstrual equality issues outside of Gambier. Ruby Schiff ’21 won an Academy Award for her work on “Period. End of Sentence,” a short-subject documentary for which she served as a co-executive producer. And Sarah Groustra '22 made national headlines when a column she wrote for her high school newspaper went on to inspire her hometown of Brookline, Massachusetts, to pass legislation requiring all town-owned restrooms to offer free tampons and pads. Calling for an end to "shaming menstruation," Groustra told NPR's Weekend Edition, "It shouldn't be a brave or sort of self-confident thing to be able to take a tampon out of your backpack and go to the bathroom.”