Investigative journalist Scott Carney '00 seeks out stories "on the fringes," as he put it in a recent conversation with Bulletin book editor Dan Laskin. 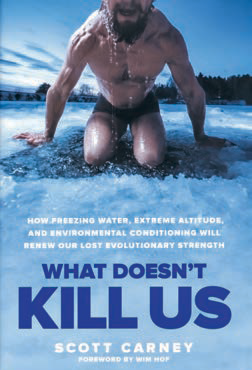 Investigative journalist Scott Carney ’00 seeks out stories “on the fringes,” as he put it in a recent conversation with Bulletin book editor Dan Laskin. His first book, “The Red Market,” dealt with human-organ trafficking. The second, “A Death on Diamond Mountain,” was about a controversial American-Buddhist guru. A more invigorating kind of guru is the subject of his latest book, “What Doesn’t Kill Us” (Rodale). Wim Hof, a Dutch fitness proponent, has developed a strange but remarkable regimen involving hyperventilation exercises and ice baths that he claims can restore our lost animal vigor, enable us to consciously raise and lower our body temperature, and even fight off disease.

Carney traveled to Hof’s training center in the mountains of Poland with the goal of exposing him as a charlatan. Instead, his own experience with the Wim Hof Method launched him on a journey during which he interviewed scientists, worked out with extreme-exercise teachers, ran punishing obstacle-course races, had himself assessed by a prominent exercise physiologist, and, finally, with a group led by Hof, climbed Mount Kilimanjaro — making the ascent in an unheard-of (and dangerous) 28 hours, wearing only lightweight clothing.

In his conversation with Laskin, Carney discussed the book and his career.

At Hof’s training center, your skepticism vanished quickly. I’m still skeptical of many things Wim says. But at the training center, after practicing the breathing method for 30 or 40 minutes, we did these breath-hold pushups and I doubled the number of pushups I’d ever done before. Surprises like that happen over and over with Wim.

For this book, you subjected yourself to a lot of suffering. The first time I dunked in ice water with Wim, I started to hallucinate and I actually started crying afterwards. But a lot of the things that start out difficult get easier very quickly. One of the major points in the book is that we are so used to being comfortable that we become very narrow in the band of where we think comfort is.

Why ice baths? To suppress the fight-or-flight response. Usually, if you jump into cold water you’re going to tense up and everything in your body is going to shake. The idea is to relax in that stressful environment in order to master your autonomic response and ramp up your metabolism. Environment is important for fitness. It’s not just diet and exercise; it’s diet, exercise and environment.

Who were the most memorable people you met in doing this book? One is Laird Hamilton, probably the best-known surfer in the world, who uses these breathing methods every day. Another is Brian MacKenzie, one of the ﬁrst people to embrace high-intensity interval training. I had the chance to meet John Castellani, who researches extreme conditions for the Army. The best thing about my job is the opportunity to fly all over the world and meet interesting people.

Your career has taken you to dangerous places, seeking out some scarily intense people. What draws you to this realm? Good stories. A lot of great stories involve intense people and intense situations. When I was doing a piece for Foreign Policy magazine in central India, about the connection between a Communist insurgency and mining corporations, I had a child soldier point a gun at me. You can’t tell this kind of story without being there. I’m not going to report from a desk.

You describe yourself as an investigative journalist and anthropologist. Can you expand on that? After Kenyon, I enrolled in a Ph.D. program in anthropology. I finished the coursework but then dropped out. I didn’t see the point of spending seven years on a topic I was passionate about, to write a book that only a few people would read. But every article and book that I write deals with anthropological questions. In every book, the central question is, “What makes us human?” The book on organ trafficking has to do with the body as a physical self. The second deals with the dark side of spirituality. This book tries to understand, in the search for something greater, what we are capable of — the beauty, the grace.

Palgrave. Against the backdrop of the Eurozone crisis, the authors bring both technical and theoretical expertise to bear on the question of the European Union’s response to globalization.

Oxford University Press. Farrell examines writing in the colonial period, ranging from the poems of Anne Bradstreet to slavery accounts, to show how, before population science existed, “enumerating people … came to seem natural and normal.”

James Gaynor '70, "Everything Becomes a Poem"

Columbia University Press. Green traces the history of U.S. policy toward East Asia from the 18th century to the present, drawing on archives, interviews and his own experience in government.

Amos Guiora '79, The Crime of Complicity: The Bystander in the Holocaust"

Ankerwycke Books, American Bar Association. At once scholarly and personal, this book explores the question of whether bystanders must intervene when they witness crimes.

Yasmin Henkesh '78, "Trance Dancing with the Jinn: The Ancient Art of Contacting Spirits Through Ecstatic Dance"

Llewellyn Publications. Known as Donna DeMarco at Kenyon, Henkesh is now an internationally known belly dancer and teacher. Her book is both a cultural tour, exploring spiritual dance rituals from around the world, and a home course in trance dancing.

Often set in small towns, Kelly’s stories have the feel of short fables.

Louisiana State University Press. In “The Genius of Love,” one of the 12 stories in “Love Is No Small Thing," family tensions open into questions of identity, yearning, loss and the possibility of change. Kenny’s stories, set in Vermont and Idaho, rely on spare prose in which human need and existential surprises detonate all the more wrenchingly for the seeming simplicity of the narrative voice.

Dan Lerner '93 and Alan Schlechter, "U Thrive: How to Succeed in College (and Life)"

Little Brown. Based on a "science of happiness" course that the authors teach at the NYU Langone Medical Center, this practical book explains how to "develop mindsets of growth, success, and resilience."

Robie Macauley '41 and Cameron Macauley '79, "The Escape of Alfred Dreyfus"

In completing this novel, inspired by the French Dreyfus Affair, Cameron Macauley worked with an unpublished manuscript left by his late father. Macauley has also recently published “Sightseeing in Hell,” a collection of 18 stories centering on people struggling to overcome unforeseen challenges.

Harper. This affecting novel for children unfolds a relationship in which both a service dog and a young autistic boy struggle to communicate.

NYU Press. These case studies look at creative communities — like chefs, tattoo artists and the inventors of medical procedures — that regulate themselves outside the strictures of intellectual property law.

Abrams/Amulet. In this second young-adult novel by Redgate (the pen name of Rioghnach Robinson), a girl dresses as a boy to audition for an elite all-male a cappella group at a performing-arts high school — and succeeds. Complicated, entertaining drama ensues.

Roy, a frustrated pastor with one foot in Christianity and another in Native American traditions, is pulled into a quest after the disappearance one of his parishioners.

Kehrer Verlag. Wolin photographed residents of Indiana housing projects from 1987 to 1991, then rephotographed them between 2010 and 2016. Wolin has also published “Stone Country: Then and Now” (Indiana University Press), revisiting the Indiana limestone country that he explored with writer Scott Russell Sanders in a 1985 collaboration.