English professor (and dog lover) Jim Carson probes the significance of animals in literature, drawing on insights from the emerging field of animal studies.

Porch reading is a popular spring and summer pastime in Gambier.

The Kenyon Review gathered students and community members to read poems by Robert Lowell '40 and share stories the about the author, a seminal figure in modern American poetry, in honor of his centennial.

The Lords captured second place at the NCAA Division III Swimming and Diving Championship, while the Ladies finished third. The men’s result marked the 38th consecutive season they occupied one of the top two spots, and the women have finished top-four for 36 consecutive seasons.

Environmental studies is elevated from a concentration to a major.

"I didn't grow up very political, but when I went to college in Ohio, a swing state, I quickly realized how much my vote mattered." – Matthew Segal '08, co-founder of Our Time and ATTN:, in Forbes.

Professor of Political Science David Rowe muses on the beauty of fly-fishing.

Investigative journalist Scott Carney '00 seeks out stories "on the fringes."

Donna Bertolet Poseidon '75 reflects on the evolving role of Kenyon in her life.

Were politics ever stormier than they are now? Kenyon's archives offer answers.

"Steward," a pen and ink series by Addison Wagner '18, pairs endangered species alongside children to highlight the importance of environmental literacy and stewardship in younger generations. President Sean Decatur, who has admitted to spending much of his adolescence engrossed in the fantasy role-playing game Dungeons & Dragons, recently dusted off his dice to play for charity. Kenyon’s Tabletop Club hosted its second annual "D&D-Cat" event, referring to the nicknames for both the game and the president.

As several students and faculty crowded around
the Cromwell Cottage dining room table to do battle with monsters and cast magical spells, more casual fans watched the game's progress live on Twitch.tv.

By selling the opportunity to give players an extra dice roll, or boost their health and magic reserves, the Tabletop Club managed to raise several hundred dollars for the American Civil Liberties Union of Ohio. 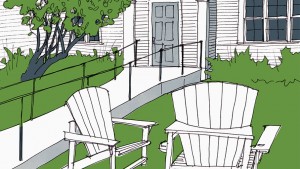 Gambier’s downtown revitalization, which is part of a long-term plan that already has upgraded Middle Path, will add student housing and retail space this summer. New student apartments are nearing completion, the Village Market is moving to its new location at the corner of Brooklyn Street and Chase Avenue, and major work will begin this summer on Farr Hall. The Kenyon College Bookstore will temporarily move into the space vacated by the Village Market and Gambier Deli, and will remain there through the fall, as crews renovate the space the bookstore has occupied for decades.

John D. Sadoff, Somerville, Massachusetts, reports that his chess tutoring business, “ChessMate Tutors,” is all online. “I’m still running as much as I can.” Johnny reminds Kenyon alums in the Boston area he is “always up for a game of chess.”

John J. Bogasky, Silver Spring, Maryland, reports that he and Jerome “Jerry” Mindes have been organizing monthly Class of ’77 Zoom calls on Sunday nights, typically with 15 to 20 classmates.