When Marilyn Stokes, a Gambier resident and fixture in Kenyon’s crafting community, visited City Museum in St. Louis to attend the wedding of Darci Kern ’14, she immediately noticed the similarities between the unique location and Kern, her former knitting student.

The famous St. Louis attraction opened in 1997 in a former shoe warehouse. It’s equal parts “children’s playground, funhouse, surrealistic pavilion and architectural marvel made out of found and repurposed objects” according to its website.

“The fact that somebody had really thought about these pieces, which many people thought were just trash, and had found a home for them, I felt was exactly Darci’s personality,” Stokes said, “because that’s what she likes to do: make the most of what is around her.”

But while many of us coped during quarantine by bingeing Netflix and trying to keep a sourdough starter alive, she was doing something much more ambitious: Knitting While Black. Kern, a longtime knitter and sewer, started the project via her Instagram account (@darcidoesit) last summer, shortly after she and her husband, Arthur, moved to Kern’s hometown of St. Louis after several years in New York City. At the time, Kern, a speech pathologist, wasn’t working due to the pandemic. She decided to get serious about social media in the hopes of landing some paid brand deals. The online classes she took on how to build engagement all said the same thing: Be yourself.

One night, while watching “The Vote,” a PBS documentary about women’s suffrage, the inspiration for Knitting While Black came to Kern. “They were talking about Sojourner Truth and about how she raised a lot of money for the abolition of slavery and to help women get the vote by selling photographs of her sitting with her knitting,” Kern explained.

Spurred by that photo, Kern searched the internet, thinking she would find more pictures of Black women with their knitting. She did not. “I looked on Google Arts and Culture, and I found that in 1,400 listings that knitting was a keyword, only three or four of those were of a Black person,” she said.

The lack of photos shocked her, but it also inspired her to launch Knitting While Black. The project is equal parts art and history, as well as a concerted effort on Kern’s part to increase Black representation in knitting. Each week she finds two photos of women with their knitting and asks her Instagram followers to choose their favorite. Every Sunday, she re-creates the more popular choice, featuring herself as the subject. For props, she pulls from her closet and her husband’s, borrows things from friends and family or purchases them secondhand. The captions accompanying the photos are thoughtful and informative, and address Black history and the current movement for racial justice. Kern posted her first recreation on July 12, 2020: the famed photograph of Sojourner Truth that had inspired the project. To date she has recreated 39 pictures and has seen her Instagram grow from around 1,000 followers to more than 22,000. She received a grant to help her cover expenses from The Be Seen Project, an initiative that amplifies and supports BIPOC (Black, Indigenous, People of Color) artists and makers whose work centers on marginalized voices and social justice.

Media outlets have taken notice. In March, Kern was featured in a New York Times article about Black women knitters. “Black people have given this country so much, and as someone who is a direct descendant of people who picked cotton, I think it’s such a travesty that the whole legacy isn’t mentioned,” Kern told Times reporter Siraad Dirshe. In April, she appeared on NBC’s Today show, where Al Roker described her as a “knit-fluencer.”

“My love for history, racial justice and knitting have all combined into this project,” Kern said, “so I decided that I would keep going until things in my life no longer allowed me to do it every week, or I didn’t have time, or I felt like I’m not learning anything new anymore, [or] it’s not fun for me. I haven’t gotten to that point yet. I don’t know when that point will come, but I plan to keep doing it for the foreseeable future.” Knitting and crafting run deep in Kern’s family. In high school, Kern found some yarn in the art room, took it home and asked her mom to teach her how to knit. Her knitting really changed, though, when she was a student in Stokes’ class, “Knitting Beyond the Basics,” at the Craft Center, which offered instruction in handcrafted arts to Kenyon community members and students.

“It was really at Kenyon where I learned to love knitting,” said Kern, who studied Spanish and Black history. “At Kenyon, I used to go to the Bookstore. On Wednesdays they had a knitting group. My friends all knew. ‘Oh, it’s Wednesday. Darci’s going to be at the Bookstore.’”

This is how Associate Professor of History Sylvie Coulibaly discovered that her academic advisee, who wrote her senior comps on school desegregation in St. Louis, was known for her knitting talent as well as her achievements in the classroom.

“I went to the Bookstore one night. The old Bookstore had club leather chairs on the right and, just when you passed the doors, there was a group of around 10 female students, arranged in a circle and knitting,” Coulibaly recalled. “On the table, there was a plate of cookies, home-baked, that one of the knitters had brought. As they knitted, the women talked about all sorts of things. That, to me, exemplified what Kenyon was: community, support, inclusiveness. I stopped and watched them for a while. It was peaceful, joyful and I think many students wanted to get away from academics, learn to do something with their hands and meet people they wouldn’t otherwise. Darci was the only non-white person in the group.” 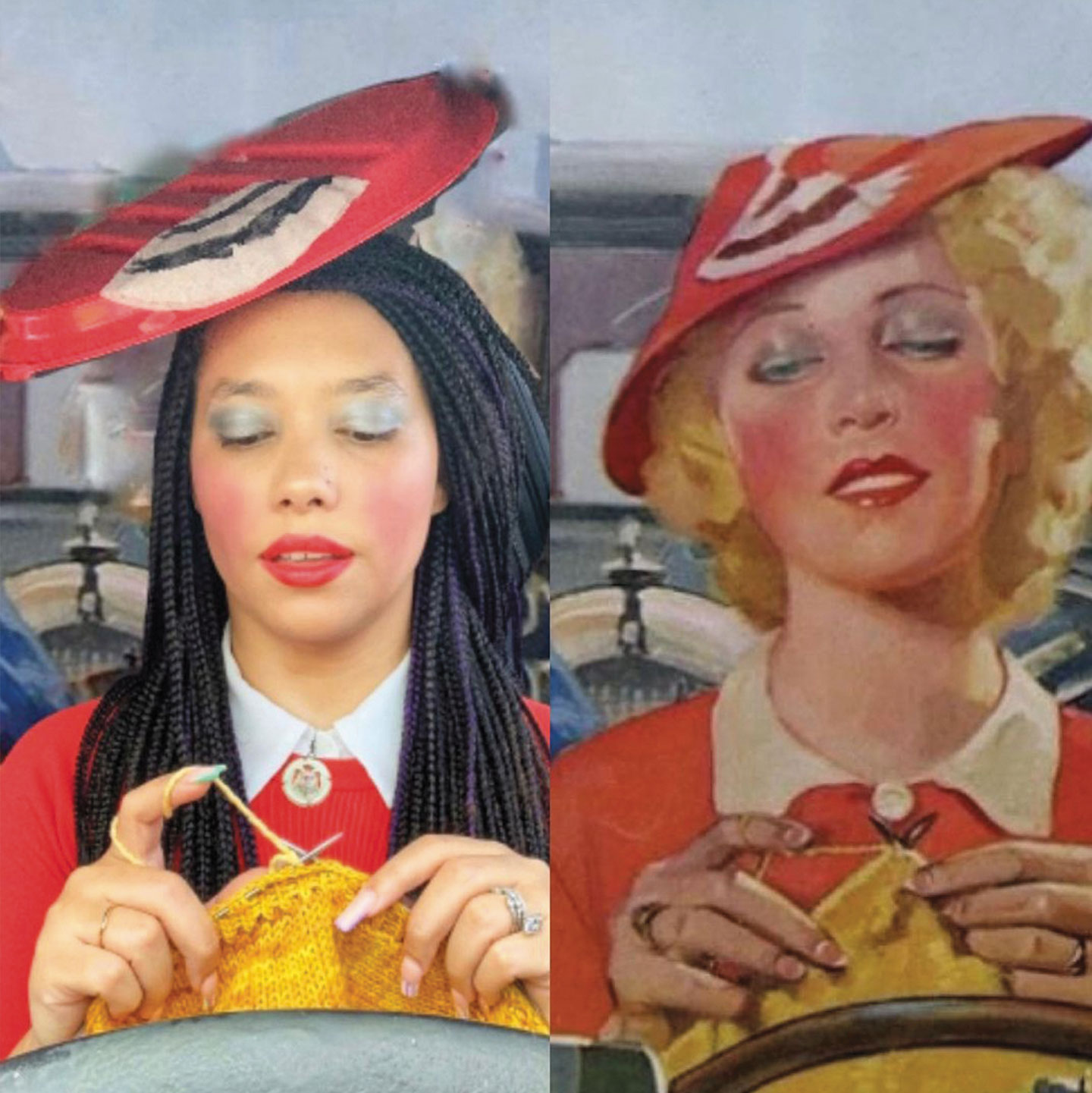 Above: Kern recreates a cover illustration from the March 1935 issue of Needlecraft, the Home Arts Magazine.

Stokes remembers the first time Kern came to “Knitting Beyond the Basics,” and said her student rarely missed a class or the weekly knitting group throughout her four years at Kenyon. “She wanted to learn to do something more than just straight knitting,” Stokes said. “She was so eager to learn. She was such a good student, and always full of questions.”

Knitting has been a constant in Kern’s life since then. After graduating, Kern moved back home to St. Louis for a bit, and then eventually moved to New York for a job teaching Spanish at a high school in Brooklyn. After teaching for two-and-a-half years, she enrolled in graduate school to study speech pathology. On the subway rides to work and school, she took her knitting with her, churning out hats, scarves and socks during her long commutes.

“For as long as I’ve known her, she’s been doing it for herself,” said Audrey Kaem ’08 of her friend’s knitting. (Although Kaem also graduated from Kenyon, she and Kern didn’t meet until they were co-workers in New York.) “When she asked me to be a bridesmaid in her wedding, she gave me some socks that she knitted.” 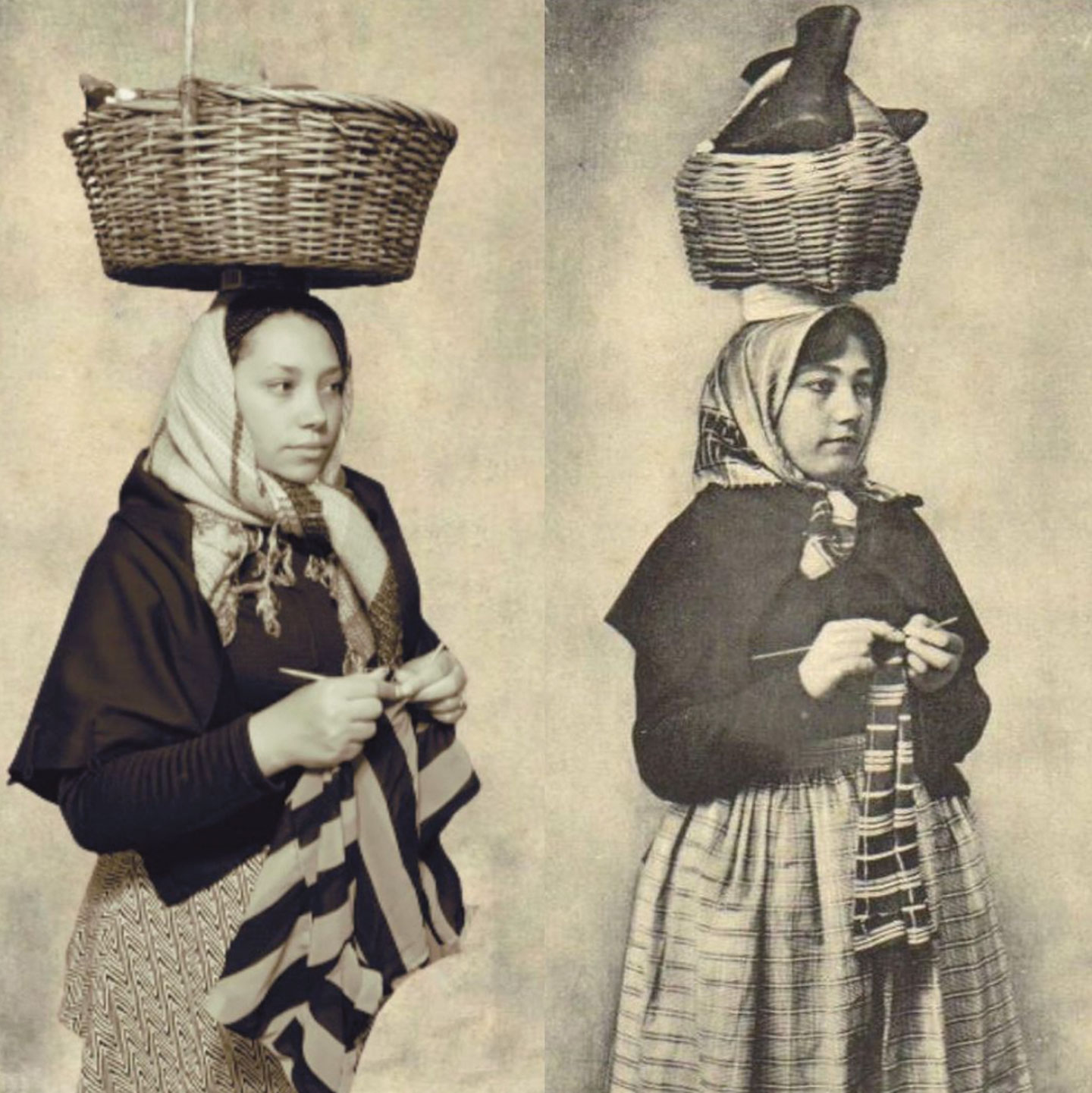 Above: Kern assumes the role of a Corsican knitter likely photographed in the early 1900s.

Since returning to St. Louis and launching Knitting While Black, Kern has thrown herself into the world of social media.

“It’s great to see her having a lot of success and getting a lot of attention for something that’s really important,” Kaem said. “The way that she’s reaching a lot of people and bringing a message that you wouldn’t necessarily think goes hand in hand with knitting — but it turns out that it does.”

Social media is known for its instant gratification, but in reality becoming a social media influencer is a lot of work. First, there’s the research and preparation that Knitting While Black entails: finding pictures, assembling props and costumes, staging the photo, editing and writing a caption. Then there’s the day-to-day content creation required. Kern shares knitting tutorials, projects she’s working on, colorful skeins of yarn, glimpses of her personal life and social justice calls to action. She responds to comments and direct messages and keeps up with other knitting and crafting accounts and influencers on the platform.

Outside of her Instagram account, Kern also runs Fiber in Color, a curated monthly subscription box of hand-dyed yarns. Each month, she features a different BIPOC dyer’s yarn. She sees it as two-fold: For people who want to support Black and Indigenous small businesses but aren’t sure where to start, Fiber in Color does the work for them. It’s also an opportunity for people of color to invest their money in businesses whose values align with theirs.

“If you’re an oppressed person ... you don’t want to be investing in your oppression,” Kern said. “If I’m investing my money into my future and in supporting small businesses, I want to make sure that I’m putting it in a place that is not denying my lived experience, [but instead] with people who accept that I have a different walk in America than they do, or people who share that walk with me — other melanated people.”

Kern wants to continue to grow her social media platform, but she has no plans to make it her full-time job. (“I worked really hard on that master’s degree!” she quipped.) This fall, she’ll start work as a speech pathologist at a local school. But @darcidoesit isn’t going anywhere. She often receives messages from people who say they didn’t know about a particular historical moment she discussed, and they appreciate her educating them and helping them take off their blinders. She hopes they continue to take away these lessons.

And of course, she wants them to keep knitting.

“I hope that more people can get interested in knitting and see it as a creative outlet and a way to manage stress and to cope with living in 2021,” Kern said. “I hope people can find joy in having some beautiful yarn or knitting something they really like that’s practical and that fits them well and something that’ll be an heirloom they can keep forever.”

Favorite type of yarn: I love hand-dyed superwash yarns with lots of color!

Favorite knitting project to date: My favorite project is my Sorrel Sweater! It has a mohair halo with braided detail around the yoke.

Small businesses you want to shout out: Yes! Some of my favorites are Seismic Dyeworks, PassionKNITS, Sister Anase Yarns, At Haynes House, Whitney Marie Anderson and Yarn & Whiskey.

Favorite books: “So You Want to Talk About Race” by Ijeoma Oluo, “Song of Ice & Fire” series by George R.R. Martin, “The Half Has Never Been Told” by Edward Baptist.

A good motto or quote that you live by: “Until the killing of Black men, Black mothers’ sons, becomes as important to the rest of the country as the killing of a white mother’s son, we who believe in freedom cannot rest until this happens.” — Ella Baker

Advice for new knitters: Start with big yarn and big needles. It feels awkward at first, but it gets easier, don’t give up!