A former English department chair reflects on the first episode of Netflix’s “The Chair.” 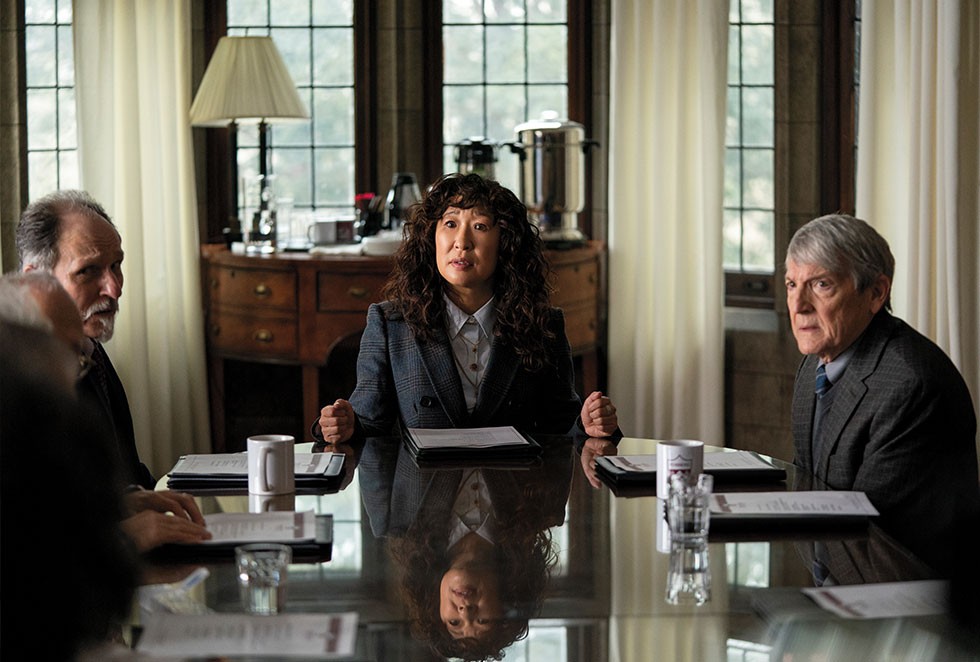 Read additional reflections on “The Chair” from Orchid Tierney and Ira Sukrungruang below.

I appreciate this opportunity to reflect on Netflix’s academic dramedy, “The Chair,” coming as it does just as I step down from my own first term as a department chair.

I thought I would be less busy now that my term has concluded, but I am finding that I am not. Like professor Ji-Yoon Kim (Sandra Oh), the new chair of the English department at the fictional Pembroke University of “The Chair,” I am a working parent, and while I am no longer a department chair, I am directing my department’s honors program and I am the academic co-director of the Kenyon Educational Enrichment Program.

There are a few ways in which “The Chair” seems very different from my experience chairing the English department at Kenyon. For example, I don’t think anyone at Kenyon (outside of the provost’s or president’s office) has an office that nice. Indeed, the chair’s office in our department is just the regular office of whomever happens to be the chair. That said, Kim’s office does remind me of the old Sunset Seminar room.

At the very beginning of the first episode, Kim receives a rather colorful plaque to commemorate her new role as chair: “F---er in Charge of You F--ing F---s.” I actually first saw this scene in the trailer and immediately messaged a friend and former chair to express my appreciation and have a good laugh. I have a great deal of respect for my colleagues, but my language has definitely grown saltier (in private) in the last three years. I think it’s easier to survive chairship with a rather brash sense of humor. Underneath that, though, I tried to balance a sense of empathy with a thick skin because it is impossible to be an effective leader and please everyone all the time.

In our department, instead of  Kim’s plaque, we have a bumper sticker that gets passed around: “Who Died and Made You Elvis.” I am told that Fred Kluge started this tradition, gifting the bumper sticker to Kim McMullen. It has been passed around to at least seven subsequent chairs: Jim Carson, Sergei Lobanov-Rostovsky, Ted Mason, back to  McMullen, Deborah Laycock, Jesse Matz, Sarah Heidt and then to me. I’ve just handed it back to  Matz. To that we’ve added a “Keep Calm and Chair on” postcard that has been circulating for about four years.

In her first department meeting, Kim addresses her colleagues, acknowledging that theirs is a department in crisis. Their enrollments are down and, therefore, their budgets are being cut. Though this is, indeed, the situation at many English departments across the country, thankfully, at Kenyon, English enrollments remain robust. But, like our peers at other institutions, we are called upon to explain to people why what we do matters. Literary study has intrinsic value. It enriches the life of the mind. It can deepen empathy, by strengthening our ability to imagine and connect to the lives of people who are different from us. That said, I also believe we have a responsibility to prepare our students for their lives beyond Kenyon, including their careers, and I am working with my department and other offices on campus to strengthen our work in that area. I disagree with Kim, who says, “What we teach them cannot be quantified or put down on a resume as a skill.” We teach our majors skills that employers value, including strong written and oral communication, analytical thinking and collaboration. The value of the English major is both tangible and intangible.

Kim tries to solve her department’s budget crisis by “suggesting” to professor Yasmin McKay (Nana Mensah) that they combine her full section of American literature with professor Elliot Rentz (Bob Balaban)’s almost-empty one, thereby giving both professors an acceptable average number of students. It’s not uncommon for faculty seeking tenure to be asked to do things they might prefer not to do, but in the case of McKay, she had to know that as a Black woman, she was even more vulnerable to an unfavorable tenure decision, despite her clear value to the college. The scene in which Kim pitches her solution to McKay reminded me of scenes in “Gotta Get Down to It,” the 2019 film  by Kenyon’s own Thomas S. Turgeon Professor of Drama and Film Jonathan E. Tazewell ’84. In the film, professor  Val Martin (Claire Fort ’07) is asked to work with colleague Walter Riggs (Damian Young ’83), a white male faculty member of the political science department, to host a speaker whom he favored but she abhorred. Because her work mentoring students of color had cut into her writing time, she was light on publications and was told that garnering Riggs’ support could be crucial to her tenure case.

One very significant difference between my experience and that of Kim is that in the television show, the department seems to be in the midst of cataclysmic change. There’s a sense of “out with the old, in with the new,” as at least a hope, if not the reality. When Kim meets with her dean, Paul Larson (David Morse), he reminds her that when she earned tenure, he told her, “If anyone can bring Pembroke into the 21st century, it is you.” And when Kim meets with McKay, she tells her, “We have a real open-ing here. … Let’s just get your case through, and then let’s f---ing shake this place up.”

My department is changing. We have had a lot of retirements and a lot of hiring lately. Over the course of my term as chair, our department significantly revised our major. At the beginning, the challenge was daunting. My department, like Kenyon more generally, has deep respect for tradition. Sometimes, love of tradition can be accompanied by aversion to change; think of the ongoing controversy about making Middle Path accessible. And yet, other colleagues were frustrated that change didn’t come more easily. But unlike Kim, I also have a sense of continuity and of mentorship. I have senior colleagues who are award-winning teachers who don’t shy away from pedagogical innovation. I have excellent mentors, both inside and outside the department, including former chairs with whom I share race or gender. In the end, we found a middle path, a path forward, as it were (sorry, I couldn’t resist), and developed a major which I believe will serve our students well for many years to come.

Like much of literature, television is seldom meant to be an exact representation of reality. But like my favorite literature, I think “The Chair” accurately captures some of the tensions and challenges inherent in running an English department, especially as a woman of color.

I am surprised that I enjoyed “The Chair” as much as I did, although it was simultaneously painful and delightful to watch. Painful because the show’s absurd portrayal of the academy hits close to home, and delightful because Sandra Oh’s performance is highly enjoyable. As a former TV art director, I appreciate the show’s visual design on which environmental storytelling relies to convey the nuances of character and context. The opening credits underscore that old adage, “Show, don’t tell,” with a sequence of recognizable symbolism: majestic Gothic buildings, worn hardcover books and elegant portraits of former faculty. These details recall the power and prestige of an institution that serves as a bastion for intellectual knowledge production. Such symbolism works in tandem with a lineage of whiteness that is ultimately disrupted when Professor Ji-Yoon Kim sits in — and breaks — the desk chair in her new office.

This rupture really is the point. “The Chair” portrays painfully the difficulties for women of color within the academy. Certainly much has already been written in this regard, so I won’t repeat the arc of the discussion here. But perhaps lacking in these conversations is how race and labor precarity often intersect, and it’s curious that the show only addresses this issue in passing. Indeed, the world of Pembroke University is strangely depopulated of contingent faculty. Only Lila, Professor Bill Dobson’s teaching assistant, gives us a clue as to how conditions of labor precarity affect women of color on the periphery of the academy. Lila’s tether to the academy is so marginal that her struggles simply don’t register for those whose labor ultimately rests on her participation. In my headcanon, Lila is the real star of “The Chair” despite her minimal screen time. I want to imagine that she not only refuses to carry the burden of Dobson’s selfish behavior, but also skillfully navigates the extractive practices of her institution. At the very least, I hope she can.

When watching uncomfortable TV shows, I often run to the bathroom, waiting for the cringey moments to pass before rejoining my wife on the couch, who says how ridiculous I am. I am ridiculous. When watching the first episode of “The Chair” I did not run to the bathroom. I did, however, spend most of the episode with my hands to my ears, my eyes closed, and saying over and over, “I can’t do this.” But, miraculously, I made it through the entirety of the show with the feeling of having re-lived many a situation within the island that is academia.

I chose to come to Kenyon because of this institution’s love and dedication to language and literature, and, most important, teaching. One of the show’s central conflicts is the tension between “tradition” and “progression.” Small liberal arts institutions are built upon tradition; they thrive on it. But the word “tradition” can be limiting — it can be seen as exclusionary and does not allow for evolution. At Kenyon there is great reverence for tradition, but that’s not all of it. We see and honor where we started, but we also look at where we are headed and the possibilities lighting the horizon.

I will not be watching “The Chair” again. It is not because of the quality of the show — I love Sandra Oh! — but because being in a state of constant squirm is not fun, and reliving the treatment of BIPOC academics is just too hard. Plus, why is it always the creative writer that is the downtrodden, absent-minded, alcoholic and tortured professor? I mean, have you met philosophy profs? (Wink.)