A Walk on the Wild Side

With the help of a walk-through super colon, Michael Sarap ’78 has worked to cut colorectal cancer rates in a rural Ohio county. 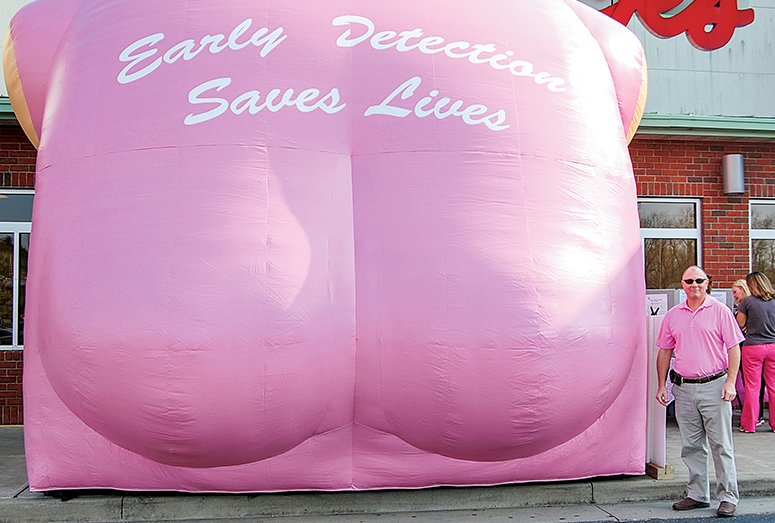 Colorectal cancer is no laughing matter, as Michael Sarap ’78 knows all too well as a surgeon at a rural hospital in Cambridge, Ohio. He’s seen hundreds of late-stage colorectal cancer cases that could have been detected early and fought off if patients had been better educated about the importance of a colonoscopy.

The good news is that Sarap and others in the Cambridge medical community have found a way to do something about the problem, in part by using humor as a hook to promote cancer screenings. An amusing conversation-starter is an inflatable, walk-through “super colon” that stands more than 10 feet and gobbles up about 1,000 square feet when deployed at health fairs and other public events. The display, part of an educational program led by the Tina Kiser Cancer Concern Coalition in Cambridge, gets people chuckling as well as thinking about being screened for colorectal cancer.

“Humor is clearly the first impression for most folks,” said Sarap, who has been a leader in the cancer prevention effort since it began in 2006. “It draws them in and educates them on the value of screening tests. Once they come for a look, we have incorporated lots of education on the walls of the display as they walk through.”

The super colon, with other promotions, education efforts, and free or reduced-cost colonoscopies to those in financial need, helped Guernsey County lower its late-stage colorectal cancer diagnosis rate from 64 percent in 2004, which was one of the highest in Ohio, to 29 percent in 2011. It fell to 23 percent in 2013, an improvement Sarap called remarkable.
The super colon has proven to be such a hit that the Tina Kiser coalition has added a breast-cancer inflatable and is looking at doing one for lung cancer.

Sarap is the program’s biggest cheerleader, talking it up at medical conferences and community meetings. He tends to steer the credit to others involved in the effort, such as Becky Wheeler, who works with the coalition, but Wheeler said Sarap’s leadership has been the foundation for the program’s success.

“He spearheaded the formation of the coalition and spoke to many groups, physicians, employers, and community leaders to promote the program,” she said. “He was the first (physician) to step forward to do free screening colonoscopies for people who don’t have insurance. He has a true concern for our community and the health and well-being of everyone.”

A native of Steubenville, Ohio, Sarap considered a career in medicine when he enrolled at Kenyon. His interest intensified while at the College, boosted in part by encouragement from biology professors Tom and Dorothy Jegla and other faculty members. “It was a love of the sciences and wanting to do something good for somebody,” he said of his decision to pursue a medical career.

Sarap also decided he wanted to practice medicine in a rural area, believing he could make a bigger difference there than at a big-city hospital. After completing medical school at the University of Cincinnati and surgical training at the Marshall University College of Medicine in Huntington, West Virginia, he landed a general surgery position in Cambridge, working at Southeastern Ohio Regional Medical Center. That was 27 years ago, and Sarap said his time in Cambridge has been rewarding.

“You can get things done in a small community even though resources are very limited,” Sarap said. “People can’t wiggle out when you ask them for help. They say, ‘Yes, I’ll do it.’”