For decades, "Reveille," the College yearbook, immortalized slices of youth. 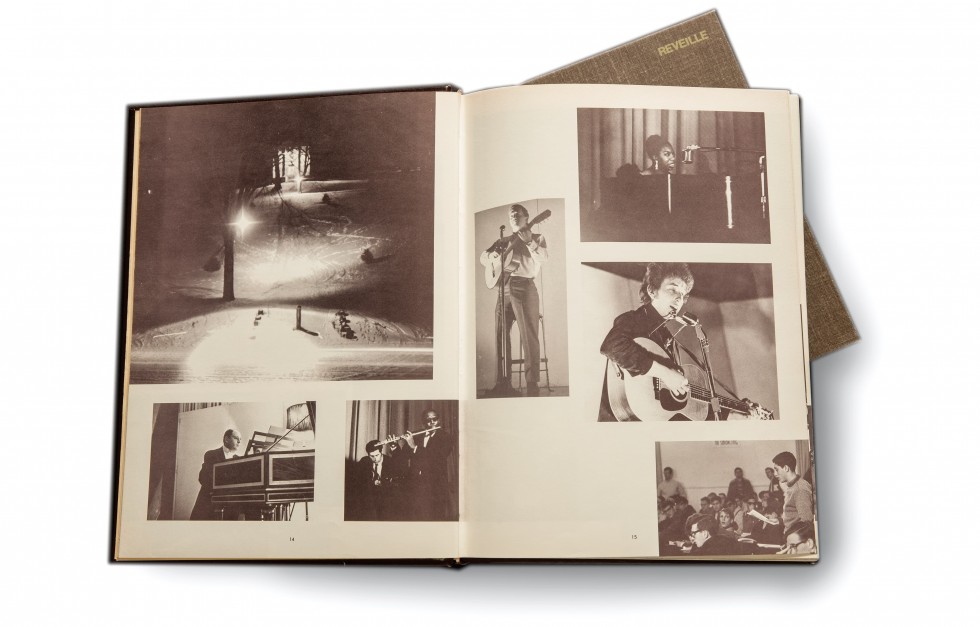 Students of American culture will recognize the young Bob Dylan with his acoustic guitar in this photo spread and above him Nina Simone at the piano. Both names still routinely make news headlines: Dylan was awarded the 2016 Nobel Prize in Literature and the late Simone was the topic of both a biopic and a documentary last year.

For Kenyon alumni of a certain age, however, these images — and the pages they appear on — likely carry a more personal meaning: The photos, documenting Rosse Hall appearances by these musical giants, appear in the 1965 edition of “Reveille,” the College yearbook. Founded in 1855, “Reveille” annually froze time in the form of senior portraits along with pictures of teams, clubs, fraternities and faculty members, plus evocations of the Gambier environs. The yearbook evolved — student editors pushed the creative envelope during the late ’60s and early ’70s — but the overall effect endured. Immortalizing a slice of youth, the yearbook forever lit the flame of memory.

Alas, nothing is immortal. Students now grow up effortlessly creating infinitudes of instant memories on their smartphones. Nostalgia pings them, moment by vanishing moment, in social media. When you can celebrate your every gesture with a flick of the finger, the yearbook seems less special. In fact, college yearbooks have been dying off across the country. At Kenyon, interest started to wane more than a decade ago, and since 2007 the once-proud student publication has hobbled along on makeshift funding, with a few administrators and student volunteers sending off material to a production unit at the Jostens company. After the 2016 edition, “Reveille” will be defunct — although the administration is investigating ways to perpetuate some version of the book.

The Greenslade Special Collections and Archives has a nearly complete set of Kenyon yearbooks. Moreover, the books are available in digital form, at digital.kenyon.edu/reveille. It takes some time to download the actual pages, but think of the wait as an old-fashioned pleasure — like the yearbook itself.