Jessica Ferrer '17 puts the finishing touches on a piece constructed with window screen and sewing pins before Open Studio Night, where senior art majors open their studios to campus visitors.

"I started collecting water from the place I visited .... each was from a distinct and separate location and had a markedly different makeup." — Katie Lovins '17, who creates photographic negatives from evaporated ocean water.

A student-led class introduces Gambier's youngest residents to the joys of movement.

Veteran journalist Geri Coleman Tucker ’74 opens up about working in the news business.

"Hopelessness is the enemy of justice. Your hopefulness is necessary." — "Just Mercy" author Bryan Stevenson, speaking in Rosse Hall

A new novel brings us into the lives of immigrant students in a troubled Memphis high school.

For decades, "Reveille," the College yearbook, immortalized slices of youth.

For the Lords soccer team, a remarkable run ended in the NCAA Division III tournament’s quarterfinal round. The Lords defeated their first three tournament opponents (Maryville, Lynchburg and Trinity) by a combined 9-1 score, but a heart-wrenching, double-overtime 1-0 loss to Tufts University capped the campaign.

The team went 20-3-0 and established the program’s single-season record for wins. Goalkeeper Sam Clougher ’17 was named an Academic All-American and finished his career as Kenyon’s all-time leader in shutouts (45).

John Rinka ’70 was inducted into the Small College Basketball Hall of Fame as a member of the inaugural class. Rinka was a three-time All-American who scored a Kenyon-record 3,251 career points. During his four-year career, he averaged 32.9 points per game, a mark that still ranks sixth all-time among all NCAA players. 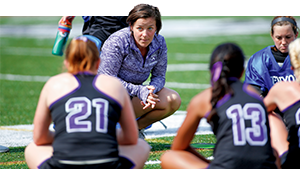 The Ladies field hockey team captured its fourth conference tournament title and registered a 2-1 win at Elizabethtown College in the NCAA tournament before being eliminated by No. 2-ranked Salisbury University. Fifth-year head coach Jacque DeMarco became the program’s all-time leader in wins with a 72-30 record.

Andrew S. Albrecht, Shaker Heights, Ohio, already worked from home, but says things feel very different now: “The pandemic remains this distraction; I’m never completely focused. Ethan is home prematurely from his junior year at Hobart and William Smith, happily reverting to hermit mode, playing online games with friends. Leighton is maintaining a positive attitude in Seattle. Jean and I are bingeing on ‘The West Wing.’ With all the concern, frustration, anger and anxiety we face daily in the news and social media, there are also stories of inspiration, generosity and caring. Taking time to recognize moments of human compassion helps keep me uplifted. Grateful to my family, friends and community — and that includes my wonderful Kenyon classmates.”

“In 2018 I started working with Central American, South American and Cuban migrant children, refugees and asylum seekers who crossed the U.S.–Mexican border, providing psychological trauma therapeutic care with the Office of Refugee Resettlement. In late 2019, I was granted an amazing opportunity at an international private school in Germany’s Düsseldorf region, where I am currently the school counselor department chair for middle school and high school. The school represents over 50 nations/cultures of both students and faculty, and we’re growing.”

After David A. Kahn and his wife returned from a trip to Iceland, he decided he needed more motivation to work out. “I figured that committing to run at least a mile every day for a year was the least bad option,” he explains. “I did make it 366 days — stupid leap year! — and 1,200+ miles, but it was close on a couple days.” Working from home, David is thankful for his kids — their son, a college freshman, returned early from Seattle University but is happy about the sunnier weather in Denver. Their daughter, a high school junior, is figuring out how to check out prospective colleges.