Maria Mendonça, the Henry Luce Associate Professor of Asian Music and Culture, reflects on the human attachment to musical instruments. 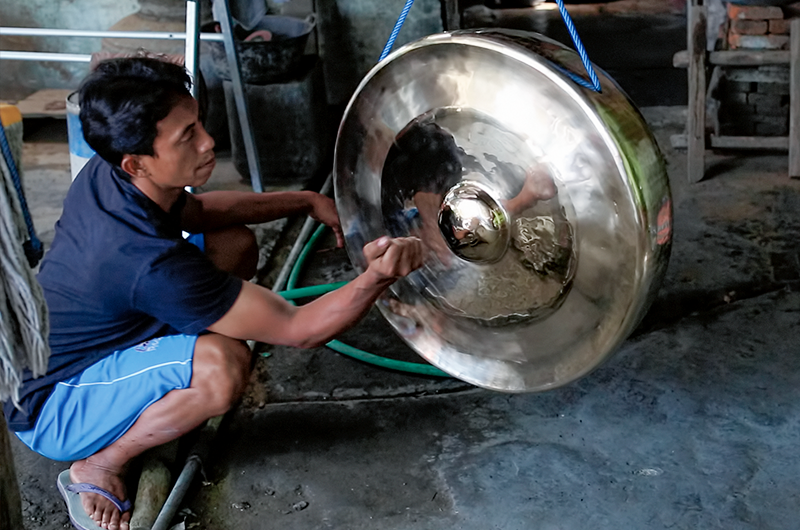 Some years ago, I asked a friend of mine, an instrument maker, whether he had ever made a guitar. “A guitar?” he replied “You might as well make a boat.”

At that point, I had studied the guitar for more than two-thirds of my life, but I had never really thought in detail about what was involved in making one, preoccupied instead with my own attempts to control the sound that came out of one. However, from that point onward, I began to appreciate musical instruments in a different way, attentive not only to their sounds, shapes and materials of construction, but also to the wide range of skills and different types of expertise involved in their creation.

The sonic qualities of musical instruments can be highly distinctive, beguiling and powerful, drawing out a performer’s musicality and individuality in very particular ways. No wonder that some musicians create elaborate performance rituals around them, and often invest their instruments with “human” qualities (for example, B.B. King and his career-long guitar-companion Lucille).

The importance of instruments has been brought home to me through my long-term research and performance involvement with Indonesian gamelan. Gamelan ensembles come from the islands of Java and Bali in Indonesia, and are made up predominantly of bronze percussion (various types of gongs and metallophones), but can also include flutes, zithers, fiddles and vocals (the precise instrumentation of each ensemble depends on the region from which it comes). Each gamelan set is unique: The instruments are handcrafted and elaborately decorated, sharing a carved and painted motif which differs from other sets. The instruments also sound unique: Each set has its own version of the non-diatonic tuning systems of the region, sléndro and pélog.

When I began to sing with the gamelan, early on in my study of the ensemble, I became hyper-aware of each gamelan’s aural distinctiveness as I performed with several different sets and tried, successfully and unsuccessfully, to match each set’s individual tuning.

At Kenyon, we are fortunate to own a set of gamelan degung, a chamber ensemble from West Java, which was donated to the College in 2005 by benefactor Tony Lydgate. The gamelan is one of the Music Department’s course offerings in ensemble performance and attracts students from across the College who are interested in the challenge of learning and performing the music of another culture.

At the point of writing, I am about to travel to Java to document the making of a new large gong for our gamelan. Why commission a new gong? Well, sadly, a few years ago, our original gong was stolen. Any theft is devastating, but this one particularly so. Aside from its uniqueness as a handmade artifact, in Java and Bali (as in several other Southeast Asian cultures) bronze gongs are also considered to be spiritually charged objects, always treated with special care and respect. In some gamelan ensembles, particular gongs are considered auspicious objects, to the extent that they are believed to be inhabited by spirits and are sometimes the recipients of offerings. When I informed my Indonesian musician friends about the theft of our gong, apart from their initial shock (this does not happen in Indonesia), several suggested (only half-joking) that regardless of our success in apprehending the culprits, the general misfortune awaiting them as a result of such an act might be punishment enough.

Perhaps the only positive outcome of the theft is that commissioning a replacement gong will allow me to witness and document one of the most stunning, sensorially immersive processes of instrument creation I have ever encountered.

Over several days, the maker, Pak Sutarno, will melt the copper and tin together, producing a bronze disk which is heated in a bellows-driven fire until white-hot, then hammered out by several men with 20-pound hammers, in melodic and rhythmic patterns, until it cools to the point of requiring reheating. Once the gong has cooled, the polishing of the bronze will begin (new bronze has a richness and shine that is difficult to describe adequately). This will be followed by the complex — and somewhat bewildering — process of tuning the gong, which is achieved through repeatedly applying and re-applying clay putty at key positions on the gong’s surface, which temporarily alters the sound and enables the expert to identify exactly where to hammer or file in order to change minute aspects of the gong’s vibration (warning: do not try this at home).

The gong that emerges from this elaborate process will no doubt sound just as impressive and attractive as the one it is replacing, which was wonderfully deep, powerful and with a strong, audible “wave” that took well over 20 seconds to decay. Moreover, it will have its own distinctive voice, which will add a new dimension to the way we play. I can’t wait to hear it in action — and bear witness to the new memories it inspires.