It seems that many people read The New Yorker from back to front, and the desire to win the magazine’s caption contest has replaced the secret screenplay in a drawer. When I was one of three finalists — along with Jason from North Carolina and Marc from Alabama — I heard from everybody, including a childhood neighbor who happened to know two of the finalists. A former student claimed he knew all three. They both insisted that mine was the best, but they might have been saying the same thing to Jason and Marc.

Relatives asked me to tell them my caption, which was a humbling experience: See, there’s a man tending a barbecue with a briefcase on it and his wife stands next to him, looking at him questioningly. My man says to her: “It’s never done.” Okay, it’s not laugh-out-loud funny, but there was an autobiographical truth to it.

There was a surprisingly long wait between announcing the finalists and selecting the winner; acquaintances anxiously Messengered me to see if I’d heard anything. I had no idea when I’d hear or how, or even whether they notified the finalists who hadn’t won. For all I knew Jason or Marc was already throwing a celebratory barbecue.

My husband warned me not to get my hopes up, reminding me that the public doesn’t necessarily know what’s funny, but the public’s votes had gotten me this far. Like Tinder for cartoon-lovers, the New Yorker’s “Cartoon Lounge” invites the reader to swipe through the caption submissions, dubbing them either funny, somewhat funny or unfunny. Once you read a few contenders, you will see that succinctness is all.

This was actually the second time I’d been published in The New Yorker. Years ago, they used a squib I’d found in an Ohio real estate brochure, in which a farmhouse was advertised as having “Wayne’s coating.” (The New Yorker’s rejoinder was: Wayne lives next door, however.) But my squib didn’t generate the same kind of heat.

Three weeks later, I was reading my email at the public library when the digital version of The New Yorker arrived in my inbox. When I stealthily went to the cartoon page to see if the results were out, it reminded me of the day after auditions in college, when I’d have to walk nonchalantly down the hill to see the final cast list posted. Given that nobody from The New Yorker had contacted me, I didn’t have high hopes. But there I was!

Winning the caption contest earned me 300 likes on Facebook, and I graciously thanked the friends who had voted for me, especially since voting required a brief but trying registration process. One friend wondered if my victory was fair given that I was professionally funny, but captions require dialogue, so who better than a playwright to supply the missing line? Marc from Alabama, who is probably not a playwright, had his man saying: “Did I tell you I quit my job today?” In the business, I’m afraid we call that expositional dialogue.

A surprising number of people wanted to know what I’d won. The short answer is nothing. I somehow imagined The New Yorker would send me a framed print but that was not forthcoming. Many people asked whether I’d submitted a lot of captions before finally winning. I had tendered a few early on, but feeling aggrieved when they failed to recognize my genius, I’d stopped. Someone told me they have a friend who always submits the same caption, certain that at some point he’ll win, like the monkeys with typewriters who eventually come up with Shakespeare.

I’m now submitting captions weekly and I have a fantasy which involves The New Yorker cartoon editors being repeatedly dazzled and inviting me to join their stable. Everybody moans about how impossible it is to keep up with their New Yorkers so I have a cartoon in mind. Picture a tombstone with an epitaph that reads: “She Kept Up.”

Wendy MacLeod ’81 P’15,’17 is the James E. Michael Playwright-in-Residence at Kenyon College. Her play “The House of Yes” is a Miramax film and her prose has appeared in The New York Times, The Washington Post and POETRY, on Salon, The Rumpus and McSweeney’s Internet Tendency, and on “All Things Considered.” 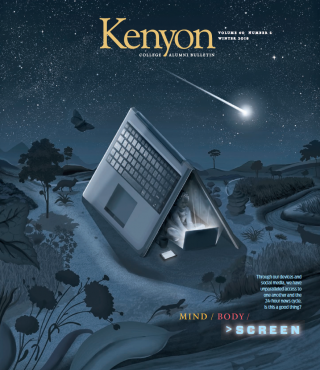